We Are All Just a BunchOfNerds

Who wouldn’t want to own their own business doing exactly what they want to do in life? As a Business Technology and Web Design major I sure hope to own my own business someday. While I am not quite there yet, I have gotten the chance to help someone else start theirs.

One of the things that sets UAT apart from the rest is our focus on gaining real world experience either through our day to day courses or though internships and in school production studios. Many students wish to create their own companies and gaming studios one day and using what has been taught here at the university and BunchOfNerds LLC is doing just that. 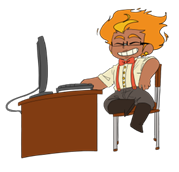 BunchOfNerds LLC (BON) started as a club of motivated students that wanted a means of working on multimedia production projects as a team. Now BON is a multimedia production company that focuses on the development of various forms of entertainment. Currently in the works are Here Or My End, a point and click horror video game, Spectrum, an animated web comic, and Feydwiir, a series of novels.

As a team of over 20 developers, designers, programmers, and artists, BON is focused on creating an array of products. In addition to our digital products BON plans on creating a line of merchandise such as stickers, hats, and t-shirts, that would include project  characters and references and topical company references.

I got the chance to join just prior of BON becoming a company and have gotten the chance to participate in the business side of a startup. Wouldn’t it be nice if you could just say ‘lets make this a company’ and that’s all it took? We thought so. V Greffin, founder of BON, and I, the accountant, spent several long nights, between our day to day lives, researching, planning, and building a business plan that would help grow BON.

With a wide variety of projects being worked on all at once, two of the most recent being from UAT’s 48-hour Game Jam. Several members of the BON team grouped up to create an abstract art game called Pitstop Picasso. For more on the game itself check out our UAT student blog. For some of our team members this was a first taste of a finished game, and that only motivated them more to continue working on current and future projects.
Follow us on Instagram, Facebook and Twitter @thbunchofnerds or check out our website thebunuchofnerds.com

Posted on Dec 13, 2019 12:00:00 PM by Bailey Nielsen in student clubs, in Student Ambassador, in Business Technology, in Digital Marketing, in Competitions