One of the things I tend to hear when people work with some of the game engines out that is that they're "awful."  Creation Kit for Skyrim for instance, can be kind of a clunky tool to develop with at times.  Trying to cobble together a new space out of pieces of existing places can be frustrating.  The main reason for this I believe is that the pieces sometimes feel like they're unnecessarily linked.  Instead of having "floor" "wall" and "ceiling" pieces, they're all one static mesh which means they can only be rotated certain ways or it looks weird.  Then if you do have a gap then trying to find filler that roughly matches the same style can be frustrating.  In addition, with pieces being as specialized as you are you can actually start building an area and then realize that the exact piece you need doesn't exist and now you have to figure out how to fix it.  In these ways I can understand how these complaints are valid to a certain extent.  Of course, you can always make your own pieces but that also requires quite a bit of prior experience and skills.

When this happens though I like to step back and think about the reason why the tools were built this way.  Skyrim has as a whole has an extraordinary number of assets.  The world is massive and they need to world to be fairly consistent.  To do this, the pieces were made to be more modular so that they could fit together well and new pieces don't have to be made for each of the 400+ dungeons in the world. 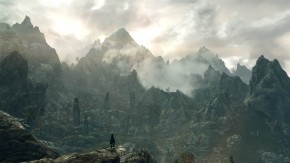 Being built this way presents some rather unique issues though that can become opportunities for other areas of your skills to grow.  As I mentioned before sometimes pieces don't quite line up the way that you want and this either reveals a seam in the textures or just an outright gap.  However, set design is another really important aspect of level design that needs to be taken care of and this actually helps a lot with that.  Different pieces placed strategically not only cover the offending area but provide a way to break up an otherwise uniform room.  So while the set design can be a little forced at times to to necessity, it was already a requirement and not an additional one.  The more creative you become trying to patch these areas, usually the better the place looks as a whole.

You won't love every game engine.  But truth be told I really like the Creation Kit.  Sure some parts of it can be frustrating but more often than not it just feels like a powerful tool that does exactly what it was designed to do.  Thinking about the reason the tools are built the way they aren't isn't just a philosophical point.  Just like in the real world it gives you better insight on how to use that device.  Most things in life (at least that are widely used) weren't just slapped together with no thought as to why.  If you spend a moment to look for the "why" you might find that your life gets a little bit easier.