Games most of the time tend to keep things fairly cut and dry.  In that way things are transparent for the player, and more often than not the choices are very easily discernible from one another.  It's either "Saintly Hero" or "Heartless Monster." 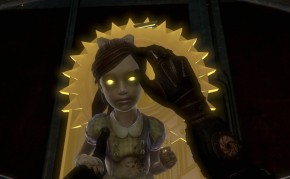 The original Bioshock is an excellent example of this system at work.  With the Little Sisters you always had a choice: either save their lives and receive less Adam (the resource necessary to increase player power) or destroy them and receive the maximum amount of Adam.  The choices here are very clearly divided as good or evil with absolutely no middle ground.  In fact, taking the middle ground is more or less punished but that's a whole other story.  **Slight Spoiler** In the end though, if you actually end up saving all of the Little Sisters they give you a gift as a 'Thank You' and you end up with more Adam than you can receive through the evil path.

In Bioshock, this system works really well since this is clearly an explicit instance where the two choices feel somewhat natural.  In the end the choice system does feel a little bit shallow at least in effect, part of what makes it excusable to me is that the choices do feel natural.  Its when games try to force an issue that the choices really feel dissatisfying.  Mass Effect III's ending really seemed to fall prey to this fact.  Though the ending was criticized heavily, I honestly don't feel it was truly awful.  Yes, it was upsetting that every choice in the game seemed to boil down to pressing a button.  Yes, the differences in the endings weren't exactly world altering.  But regardless it could have been significantly worse and for those who were upset about Shepard dying, frankly it had to happen... or at least it should have.

Games like things to be binary  because it's easier for all parties involved.  Players can easily tell what kind of effect their decisions are going to have, developers have a better idea of where each choice should lead and in this way most people are generally happier.  Yet trying to force decisions to be one or the other can often just leave a player feeling frustrated.  In Mass Effect III the "best" answer in the end seemed pretty evil.  Yes, all of that stuff was happening a result of the Reapers but completely wiping out all Artificial Life forms in the universe because of the Reapers screams "wrong."  Yet it wasn't that giving players that particular option was wrong, it was simply the fact that they tried to portray that answer as the "good" answer that seemed to cause the uproar.