Greetings and Salutations everyone!

So across the web, there's some pretty cool creations going all around. And when it comes to these creations, the nerdier or geekier it is, the more we are all about it! This time around, I found something pretty awesome, and I feel it is best shared with everyone!

So a bit of backstory:

For anyone who has seen the Avengers movies, you would probably know of Thor and his immovable hammer: Mjolnir. Mjolnir is considered to be one of the most fearsome weapons in Norse mythos, where it is capable of leveling mountains and can only be lifted by one individual. The hammer carries the inscription:

Whosoever holds this hammer, if he be worthy, shall possess the power of Thor. 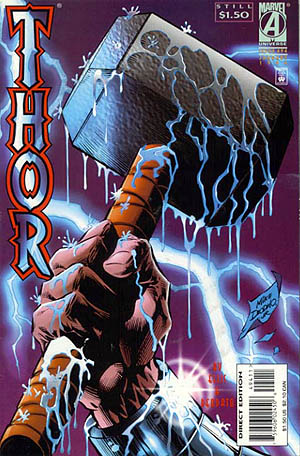 And it can only be held by one person right?

Well this is in the case of the project undertaken by an electrical engineer by the name of Allen Pan. He runs the Sufficiently Advanced YouTube channel, and created his own version of Mjolnir; the main kicker: only he can pick it up (at least on a metal surface).

To make it immovable, the hammer consists of three major components:

All of it makes a recipe of pure awesomeness though when it is on metal! The hammer energizes the electromagnets and whatever it sticks to, it definitely sticks to!

I highly recommend checking out this video, as it's pretty awesome!