Nvidia recently revealed two new cards last night under the names of the GTX 1080 and GTX 1070. These cards are extremely powerful as well as extremely affordable in reference to their power (If you look at the price tag alone you might not agree). As far as prices go, the 1070 will be available for $449 and claims to buy Titan-X level performance. As a point of reference their current top-of-the-line product is the Titan X, which retails at roughly $1,000. The 1080 will be available for $699 and claims to be more powerful than two GTX 980 cards running in unison. 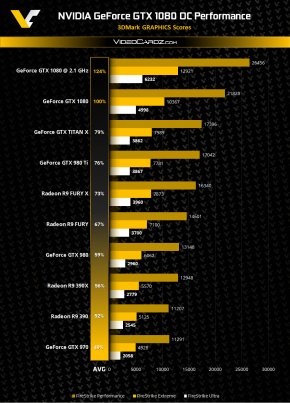 The 1080 will be available May 27, and the 1070 will reach shelves on June 10. This was announced during a special event held on May 6, which was a surprise to the public as the company kept this event under fairly strong lock and key. Nvidia seems to have pulled out all the stops with this one claiming it can be overclocked to 2.1GHz, which is merely a dream at this point. They have also upgraded their memory from GDDR5 to GDDR5X, which they claim allows the memory to perform more than a third quicker than the old 980. Because of the 256-bit bus, they have left room for a 1080 Ti in the future. The 980 Ti offered a wider, 384-bit bus, so we can only assume the 1080 Ti will be even better. The card also is, what they call, an asynchronous GPU. What this means is that the card can allow two tasks to run somewhat simultaneously, whereas the non-asynchronous cards would have to wait for the first one to finish. In terms of comparison, the 1080 beats out the Titan X in every category except CUDA cores, memory, and memory interface width, and for just two-thirds of the price.