So it's that glorious time of year known as E3 and there is much to be happy about.  Great games being revealed, footage of games we already know about, and of course the surprises.  This E3 in particular actually brought an end to some of the "jokes" of the game industry, that is to say games that seem to be stuck in development hell.  The Last Guardian for example, was announced at the start of the life cycle of the Playstation 3 and didn't get a release window until just this year.  Personally, I'm a much bigger fan of "it's ready when it's ready" rather than "it will be out X-day of this year come hell or high water."  Don't get me wrong, deadlines are an important part of any project but sometimes certain considerations have to be made.  However, that isn't what this post is about so at least for now we'll put that on the back burner.

Instead there is something to be said about this E3 in particular.  The pacing of E3s generally follows a pretty predictable curve and the exciting thing is that now and for the next several years at least will be some of the best E3s we'll have for a while.  E3 tends to follow a series of rises and falls depending on where you are in the life of the current generation of consoles.

So you start with the annoucement of "NEW CONSOLES!" and everyone goes nuts but in truth there isn't a ton there because developers are still figuring out how to use the new hardware.  E3 after consoles are released you get the promise of great things to come in the future.  So there's more excitement but again not much substance.  The next few E3s after that are awesome though, because you start to have great games you will get soon and some which are promises of greatness to come.  This is currently the section that we're in right now.  It's a time when new IPs are most likely to be announced, and developers are ready to really crank up the heat to test the limits of the new consoles.  As a gamer this a wonderful time.  There's so much to see and what's to come is extraordinarily exciting. 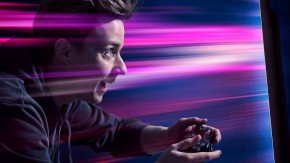 Eventually it starts to fall off as the consoles get older and companies start preparing for the next console announcement.  Then the cycle will begin anew after that point.  But until that time comes, it's going to amazing for the next several years.