Computers: What do you need?

So for a little while after I moved to Tempe I actually worked as a computer salesman.  Its a job that I truly grew to despise with every fiber of my being but not because of customers, but really because of the company itself.  In truth, the customers at that job weren't so bad.  They were often very friendly and intelligent folks who simply knew very little about computers.  However, what always did surprise me about the people that came in was the fact that they hadn't stopped to consider a fairly simple question:  What do you need to computer for exactly?  It's a practical question that you really should ask yourself before any purchase.  This question is usually at odds with the other important question you need to ask yourself, "What can I afford?" but we're going to set that one aside for a moment.  What you need is important because you may not need the biggest baddest gaming computer you can find just to play what you want to play.  There were more than a couple times where I would get people that would come in and ask me for a computer to play games.  But by "play games" they meant Facebook games like Farmville or Bejeweled.  Some of the other sales people there were more than willing to sell them a $4500 monster, but personally I found that to be excessive to say the least.  If you don't about the fact that you wouldn't even use a third of your computers abilities and you'll be overpaying for it then that's fine, but you should still know that's the case. 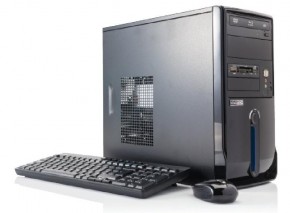 Personally I always find that building a computer to be the most preferable option.  I've been doing it since I was about 9 years old, and its actually not too difficult.  Usually you can find the information just by googling "how to build a computer" but if that makes you uncomfortable then that's fine too.  Just always make sure that you are buying a computer to suit your needs and not whatever some sales associate throws at you.