I'm getting a bit teary-eyed because every one of these posts brings me closer to running out of cartoons I'm up-to-date or familiar with. Also, you'll be crying with this next entry: 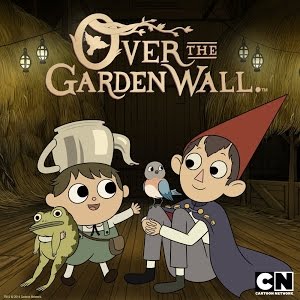 Over the Garden Wall follows the story of Greg and Wirt, two boys lost in the woods and trying to find their way home. Along the way they make new friends and find out more about the truth behind these woods they seem to be unable to find their way out of. Some of those friends include their frog (whose name varies per episode) and Beatrice, a talking blue bird on her own mission. 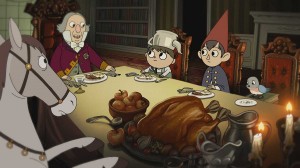 Over the Garden Wall, as opposed to Gravity Falls or Steven Universe, is a Cartoon Network "miniseries". There are only 12 episodes, with every one being just under 12 minutes long, so it's a show you can get through in just one sitting which really makes it feel like an episodic movie experience more than anything.

So as you might have gathered from the other posts, I'm a fan of cartoons with strong, overarching plots more than anything, and this show is no exception. What makes this show really stand out though is just how bizarre the whole thing is, from beginning to end. In the Shakespeare class at UAT we recently read Macbeth, where one of the major themes is "fair is foul and foul is fair" where the things that look evil and scary are actually some of the most pleasant or most harmless.

In fact, one of the first things you notice about the show is just how dark and dreary it is, visually.

The fact is, this cartoon is dreary and colorless apart from the personality of the characters themselves. The world really IS scary, this show doesn't try to hide that with bright colorful characters who are always happy. Every character in the show feels like a real character with real problems and concerns. In that way it reflects real life, even in this strange world full of monsters and talking animals. 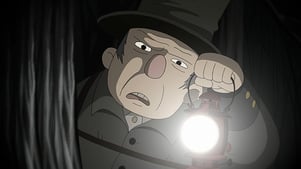 The depth the writers go to in making you question the motives of every single character leaves you constantly curious about what will happen next. That's not to say there isn't a bit of comedy here and there though. Greg's personality alone keeps the mood upbeat and keeps the plot moving forward, and there may be a song or two to break from the colorlessness of the setting.

This is not just some show for kids. Not young kids at least. In fact, many of the events in the show are Courage the Cowardly Dog levels of creepy.

Over the Garden Wall is a true masterpiece in telling a short story with dramatic characters in an utterly bone-chilling way, it just happens to be animated as well. It's one of those plots that never fully explains itself until the ending, and once all those puzzle-pieces fit together it leaves you sobbing in a corner. Everything from the strange events that take place, to the silly costumes the main characters wear, is explained in a way that makes it so much more clever than just a story of two kids wandering through the woods trying to make it home.

Just like this post is shorter from my last few, this show is much shorter than most other cartoons and anime out nowadays, so if you get 2 hours of free time I definitely encourage checking it out.

Posted on Apr 9, 2015 4:48:52 PM by Admin in animation, in Blogs, in Geeky Stuff, in Over the Garden Wall, in Student Life, in cartoon, in cartoon network, in cartoons