Alright scrubs, I'm here to talk to you about cartoons. "Cartoon Crazy" is gonna be a series dedicated to recommending some great cartoons for all ages (adults included), so strap up and get ready for an adventure in 2D animation!

Today we'll be starting off with what is probably my favorite ongoing series so far.

At first glance the show seems like a random series of episodes showcasing Steven Universe, a young boy with a magic gemstone where his bellybutton should be, fighting monsters and solving mysteries with his friends and guardians: The Crystal Gems (Shown Below).

Steven Universe may seem like just some "Status Quo Is God" trope, where after each episode everything just resets back to the way it was before for another series of shenanigans (think Spongebob or Family Guy). Anyone who thinks that is missing out on what may just be one of the most complex and well-constructed series I've seen since Avatar the Last Airbender (I'll leave that for another blog post).

We are talking Gravity Falls Bottomless Pit levels of deep in this show. Everything is connected to everything else, no matter how trivial some of it may seem at first. That picture of Cookie Cat ice cream sandwiches above from the first episode actually foreshadows events that happen 40 episodes later. Every episode has its own little quirk that lets viewers enjoy the 12 minute episode as a standalone segment. That said, if you watch all 50-something of the current episodes in order you get to see the building of relationships, character development, and a constant surprises and suspense as the plot goes from watching Steven try to figure out his super powers and eat ice cream to an emotionally devastating space adventure full of explosions.

Now one of my other favorite parts about the show? Memes. Memes and anime references and subtle pop culture references that make looking at the backgrounds and watching the characters even more fun. Many of the fight scenes are based off of anime and games like Dragon Ball Z, Sonic the Hedgehog, and Sailor Moon. Steven has a Sanic figurine for crying out loud. 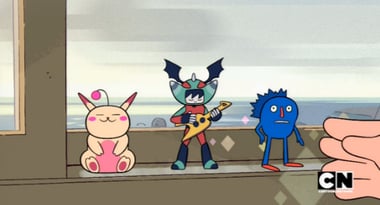 Also the show is super progressive, with an extremely healthy majority of both the voice actors and the characters in the show being women of color; the Crystal Gems themselves have no defined gender (being non-human lifeforms). Even the characters in the games, books, and movies that exist within the universe of Steven Universe typically have strong, non-sexualized female protagonists. You wouldn't really notice this watching the show though, the focus is always on how the characters interact with each other, cracking jokes and going on dangerous missions to magical settings. It is a perfect example of how to create an amazing show with truly deep characters, not just a bunch of gross stereotypes thrown around for political correctness. Heck, one of the Crystal gems even punches a shark! 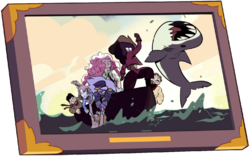 This post has been a whole lot of rambling and side-stepping about what actually happens within the show, and there's a good reason for that. "Conclusion?" is because I have no idea how to express just how amazing this show is without sitting someone down and spoon-feeding them glitter and monsters and ice cream. However, "Conclusion?" is also because this amazing plot-driven adventure through time, space, and donuts actually has no end in sight! The show is confirmed for over 150 episodes already, and they've barely breached 50.

So I beg you, readers. If you love Sonic or Anime or crappy internet jokes, or if you love deep characters in a lighthearted and beautifully animated story, watch Steven Universe. Know that the show is much more than it seems on the surface.

They also have a mobile game that was just released!

Posted on Apr 2, 2015 4:48:55 PM by Admin in 2D animation, in American Animation, in Blogs, in Geeky Stuff, in steven universe, in Student Life, in cartoon, in cartoons, in Cookie Cat