An example level from the Portal 2 Level Editor

So today I am going to be talking about working in game editors. Being a game designer, or at least one who is in the game design degree, I have worked with a handful of editors over the program, and have come to develop some interesting opinions about them. This will mostly be focused on the editors I have used in the past, and how my experiences with them has gone.

So to begin, I would like to start with the basic idea of a game editor. Having a built in way to create levels for a game lets regular people expand on the games fundamentals, typical mechanics, and even style. If you allow players to create levels for your game, they might have ideas that you either didn’t have or weren’t able to be fitted into the game itself. This can lead to strong ideas for sequels, extra content for DLC, spotlights, and the list goes on. When people can create their own levels, it also adds a tremendous amount of play time to the game. For example, I love Bioshock Infinite. I believe it is a beautifully created game with a story that has stuck with me to this day. The mechanics are fluid, easy to learn but hard to master, and the graphics are incredible. With all of this, I would venture to say it is one my favorite games, however I have never played it more than once all the way through. I wish I could put more time into the game, but after completion, I never did. At least to me the game didn’t have any re-playability. There was nothing new and exciting after I had played it the first time. Maybe there was an easter egg or two that I missed, but that isn’t enough to warrant spending tens of hours to play it through again. My point is that with the addition of a level editor, games can have entirely new life with players, which would make them more likely to recommend the game. Now obviously a level editor with Bioshock might not be the best idea, however with games like Portal, Broforce, and other similar games, a level editor can allow players to play that game hundreds of time over if they so wish. I have found that game editors are also an extremely useful thing for designers. This can give them an inside look to how levels are made and how they function, which is a critical ability of any good game designer.

Say you are looking for a job at Bethesda, then creating levels or areas for games like Skyrim, can lead to a better interview than if you are really good at making levels for Hello Kitty: Island Adventure 2 or something like that. Understanding that each level has a huge amount of tiny parts to it is something I have found to be imperative to creating work I am proud of. The majority of the level editors I have worked with are mostly in a “drag-and-drop” environment, which means that the main thing you do is just decide how to place the assets instead of making your own. Warcraft 3 is a good example of an editor where it is no just a “drag-and-drop” environment. This editor allows you to bring in assets from other games, or even from your own creation. With this, people can make all sorts of game modes, like Dota, which was originally a WC3 mod. Overall I feel that editors are a great addition to any game that would allow for it. This can give your game the ability to last forever if the content is solid enough.

The difference between a game engine, pictured above..... 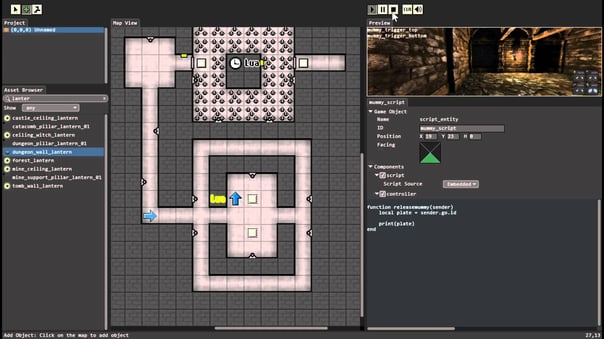 ......and a game editor pictured also above.