3 Things I Love About Technology

In celebration(?) of Valentine’s day, we are all writing about things we love about technology. I have had a love for technology since day one. One of the biggest things I love about technology is that it is constantly changing the lives of everybody around. As a millennial I have to say that my generation has seen the most technological growth out of anybody else. Because of this, and the rapid rate at which it evolves, we have come to expect that our lives will always have this huge amount of technology intertwined on a daily basis.

This amount of rapid change has caused some great revolutions in our lives. The popularity of cell phones has made it possible to converse, on a daily basis, with people on the other side of the planet. Just 20-30 years ago, you had to be some kind of CEO or multimillionaire in order to have a personal cell phone. Now even children will have some sort internet accessible device. Now I am not mentioning the internet itself as I would not have enough time in the day to even touch on the amount of impact it has had. So instead, like I said, I will be focusing on the impact of tech growth in general. We have all had some huge impact on our lives from technology, and I can hardly imagine life without it.

Another thing I love about technology is how it can bring people together. Maybe not in a way that would be considered a ‘function family’ relationship, but at least in a way where they can share experiences that will stay with them for the rest of their lives. With some bigger games, the community can become quite toxic, or caring, depending on the game. Whether you like it or not, technology brings people together, for better or worse, which in my eyes is still better than not being brought together at all.

A third thing I love about technology is the experiences that it can create. For example, virtual reality alone can create life changing events. If you have ever seen the commercials for the Gear VR, people come out of those with tears in their eyes. While this is most likely played up, the feeling is still similar. Being a gamer for so long, having this become reality (virtual as it is) is pretty close to a dream come true. 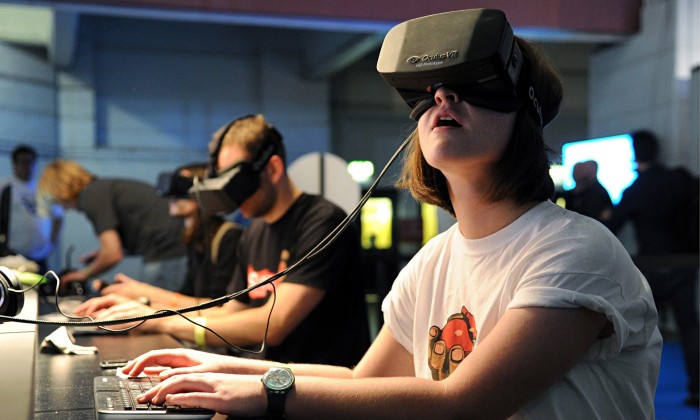 This is the typical face of people whilst using VR