This past Wednesday (May 28th, 2014), I went to my first IxDA Phoenix meeting to learn more about designing with empathy. Two UX Architects from IBM, Brenton Elmore and Teresa Swingler, gave a presentation and hosted a short workshop on how to empathize with users. 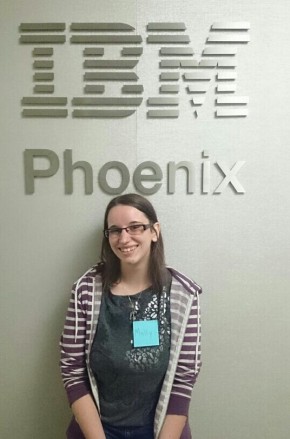 In HCI, we often create personas, which are fictional people that represent real or potential users. Personas have names, lives, and characteristics that a user might have. This is important because personas allow us to think about how a product might be different for the different people who are using it.

In the workshop, my group created Elizabeth, a 45 year old marketing executive. Elizabeth is married with two children and a dog, but unfortunately spends a lot of time traveling due to her job. Our group was focused on the issues of traveling by plane. To make Elizabeth really come alive, we needed to understand exactly how she felt.

Teresa introduced something called empathy maps, which essentially help the personas become more relatable. In an empathy map, each person in the group writes down one thing the persona might say, do, feel or think and places it in the appropriate section on the map. 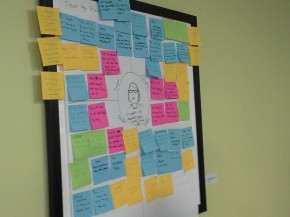 It's usually pretty easy to come up with things for the "Does" and "Says" sections of an empathy map, because these are things you can observe about people. "Thinks" and "Feels are a bit different, because they are not observable. These sections require you to really think about how you might feel in their shoes.

Once the paper is covered, you analyze and discuss the things that everyone came up with to get a better idea of the persona. For example, we realized through the empathy map that Elizabeth had three main problem areas: she was traveling alone and was a bit lonely, she wanted to make sure she had rides to and from the airport, and she wanted to be comfortable while traveling. These gave us three areas we could potentially tackle with design.

It was pretty fun, and gave me experience working with different team members to create a persona. If you're interested, here's a link to some pictures from the event on the IxDA Phoenix Facebook page.