What's behind these recognizable faces around campus? A story, of course.

But no student comes to University of Advancing Technology (UAT) with the same story or aspirations. Each has their own experience that brought them here. Here, you get to know more about some of your most frequently seen people around campus, all in their own words, regarding their path and how they ended up at UAT. Not only that, you get to learn about what they’ve been able to accomplish while at UAT with no less than hard effort and dedication toward their aspirational goals. 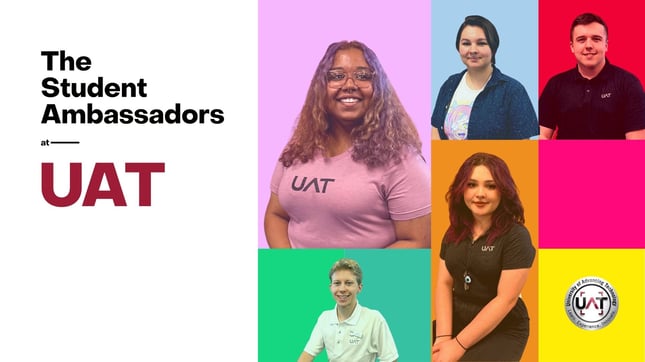 One of the most common challenges students entering college face is deciding what institution to attend. Student Ambassador Hunter DeVries-Ramirez talks about his own experiences in confronting the opportunities available, and what helped him decide that UAT was the place for him.

“As a recent high school graduate, the pressure was on to attend a university and expand upon my educational goals. This was quite the task as I was one of those lucky individuals that still had no idea what career I wanted to make for myself. So, my first steps involved reaching out to a nearby community college to begin my core classes, with which I could create a solid base as I decided my future career.

With some money saved up and a new determination to get my life on track I was able to find UAT through a social media ad. The website had all sorts of information about the university, and resources to help me get in touch with admissions staff. Shortly after I scheduled my first tour and fell in love with the vibe of the university. It was also very local to me, so getting there would be convenient.”

The wide appeal of UAT means that great minds from across the country enroll, and add their unique talents to our community, but even so, it’s no easy matter to pick out which program path to enroll in. DeVries-Ramirez describes the initial doubts he had after he had already committed.

"When I finished sighing up, I was able to move in the dorms here on campus and start my educational path towards game design. This wasn’t the case for long though as I quickly realized that game design wasn’t for me, but I did have another interest and that being cyber security. Finally, after getting in contact with UAT's Student Services, I was able to switch my degree and begin my path towards my dream job."

That's what Student Services is for; helping students through challenges to support their goals. Technology, after all, adapts and evolves each and every day. It's no surprise that UAT is able to do the same, especially for its students. 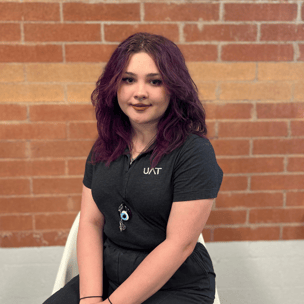 “I was born and raised in Houston, Texas. I went to high school in a very small town on the outskirts of Houston and lived there my whole life. When I was first made to think about my future educational choices the idea of out-of-state college was out of the question for me. A very sentimental piece of me wanted to stay close to my mother and two brothers and go to a college that was close by. However, from my story, you can imagine things did not go as planned, and instead opened so many more doors to me than I could have ever imagined.”

Katherine wasn’t sure that anyone could give her the challenges that she sought, nor a community that welcomed her. Then she found UAT.

“When I was younger I had decided that I wanted to go into a field that was science-related. So, I looked at psychology, forensics, geology and other fields related to those three. I enjoyed these subjects a lot, but something always felt empty. I always felt like something in me was missing, and studying those fields began to feel robotic. Around this time, I had begun to play video games a lot more than I ever had in my life to make the feel that little something I always felt was missing in my work.

One night, while playing a game with a few of my friends it hit me what was missing, passion. I had no passion for the fields I was wanting to go into and it made me feel dull and like a false image of myself. This caused a major issue though, my family hated even the fact I played video games as much as I did. They only saw it as a waste of my time, and they would frequently berate the streamers I watched claiming ‘It’s not a real job, they’ll never make enough money to support themselves.’ These hurtful statements took a toll on me, but I knew what I wanted to do at that point, and that was to be a game designer and game artist. I eventually told my mother about my dream. She was hesitant at first, but regardless supports me through my career choice.

That is where looking for a college then became an issue. I found that I did not like any of the colleges in my area. None of the offered Game Design and Game Art and Animation courses like I had envisioned and wanted. I was starting to get depressed thinking I would not be able to find a college that would suit me and my dream, that was until I found UAT.

Previously, I had never heard anything about this school and upon talking to them I found that they had everything I ever wanted. The only issue was, it was miles away from my home. Regardless, I knew what I wanted with my life and I made the commute to UAT! Now I am a sophomore studying Game Art and Design with the options to learn more than I ever originally imagined. I miss my family, but I know here I can have the future I have always dreamed of. So, I can proudly say I am so happy I made the commitment to myself and to UAT.”

Student Ambassador Maya Shackleford had different priorities when it came to deciding where she’d make her dreams a reality. She also called her UAT experience “life-changing,” citing UAT's game design degree — and the opportunity to earn it in 2.8 years as a full-time student — a major appeal.

"I grew up in a small town in the middle of nowhere where nothing really happens except for bipolar weather. So I wanted a change. I started looking up colleges around the states with specific qualities.

"It had to be in a hot place, so somewhere south. It had to have a good degree in Game Design. And most importantly I wanted it to be small. That’s when I found an advertisement for University of Advancing Technology on my social media feed.

It’s in a hot place (Arizona), it has an amazing game design degree (that I can get in less than three years), and when I had my virtual tour, I saw how it was a small campus. It met all of my criteria. So I filled out UAT's application, got accepted, and it changed my life. I became a part of Geek Rho, UAT's student council, as an EXL Manager. I'm not someone who helps get new students settled in at UAT.”

In some cases, students have gone out of their way to attend UAT. Skylar Baumgartner traveled clear across the country to pursue her educational goals. 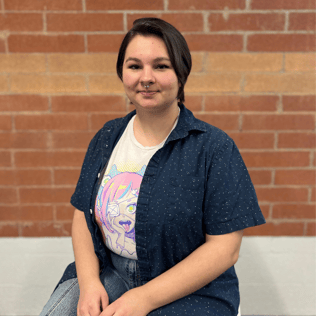 “I am originally from Port Huron, Michigan. My journey to UAT has been a very interesting one; My knack for traveling and experiencing new things has always been around and has even landed me in Florida for about 3 years of my life before moving to Arizona.

When I finished signing up I was able to move into dorms here on campus and start my educational path toward game design. This wasn’t the case for long though as I quickly realized that game design wasn’t for me, but I did have another interest; cyber security. Finally, after getting in contact with student services I was able to switch my degree and begin my path towards my dream job.”

“I originally wanted to be a marine biologist, but not long into this dream I had concluded that I am terrified of water… so I ended up having to come up with a new dream. I struggled for a little bit with finding myself after this until the lockdown for COVID-19 had happened in 2021. I had lost my job due to the lockdown, and I was stuck at home playing video games for the majority of my time.

I had known that I wanted to get into making video games, especially when I had played a few of the games that came out during this period of the lockdown. I had realized that I was not too keen with the style of characters that were presented, and I had seen a lot of potential that was missed for the storyline and the personality of the characters.

This is when I decided that I wanted to go to school for Character Design and Game Art. I had already applied to UAT a few years back when I was a Junior in high school and decided “Why Not?” Life is short, so I had packed up all my things and moved to Arizona! UAT was very helpful with getting a Dorm Room set up, making sure that I was comfortable and even let me know about the stores and fun things to do in the area!

Moving to Arizona and attending UAT was the best thing I could have done for myself and my future. Not only am I chasing my dream, but I am doing it with people who want to see me succeed and help me excel!”

Find Your Fit at UAT

These unique stories form our distinctive and creative culture at UAT. Are you ready to add your own legacy to our innovative community? Check out these great resources to help you or choose the path that’s right for you. Follow along with more UAT content by subscribing to our main blog or student blog.