UAT is all about challenges. From our project-based curriculum to our 48 game challenges, students are tested. And the freshmen are not excused from this. Orientation is a great time to meet new people but is also where our Provost, Dave Bolman, announces for the first challenge as a UAT student. The Provost Challenge. A theme is announced and students are tasked with making something around that theme. Working in predetermined groups, students have 10 days to come up with an idea and create a prototype. The possibilities are endless! A game, product, film, or whatever else they can come up with is open for consideration. At the end of the challenge, the teams present in front of a group of professors. With much deliberation, a winner is announced. And this semester has been no different. 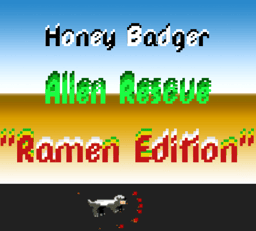 This semester had three themes that the team could choose from. Ramen, honey badgers, and storm area 51. Team Maleficent created a video game as well as a custom controller. The video game included all three themes, “Honey Badger, Alien Rescue: Ramen Edition”. Playing as a honey badger, you storm area 51 to get to the aliens while gathering ramen. With the goal of creating a game, the team also wanted to go above and beyond and not only create something fun but also inclusive to everyone. With that in mind, they created a one-hand controller that all required movements could be done with just the one hand. What an awesome what to help those with low-hand mobility! With a Wii remote as inspiration, they created their very own controller that worked. An awesome achievement for such a short time.

With 10 days to come up with an idea and make it, the competition was high. And the

judges were impressed. In the end, everyone showed up to the presentation and the number of students actively working allowed them to now only create a game but finish it. The art assets were impressive and had great visualization. UAT is a very project-based, the game along with the custom controller is a great introduction into the student innovation project.