Hello! all so recently I had the awesome opportunity to go to Monday night raw with some friends this turned out to be a great experience. So if you don't know what happened at the last paper view it was a money and the back ladder match , the winner of this match gets a contract to the world heavy weight champion at anytime. Dean Ambrose was the winner of the money in the bank , after that match immediately followed Roman Regins vs Seth Rollins for the world heavyweight title. after a hard fight Seth Rollins managed to win but Dean Ambrose came outta nowhere hitting Seth over the head then cashing in pinning Seth and claiming the world heavy weight championship title. We went into this Raw pumped and excited this was the second time I got to go to a WWE live event and once again I was excited the whole atmosphere was just so live and everyone was having such a great time. When we arrived we had ticket issues which made me pretty upset because are seats where supposed to be worse then last time , don't get me wrong I knew that we only paid about 20 bucks for the seats so I didn't expect them to be the best. As we were waiting for our tickets everyone just had this sadden look on their faces but something that nobody expected our seats were changed from up way high into 10th row!!! 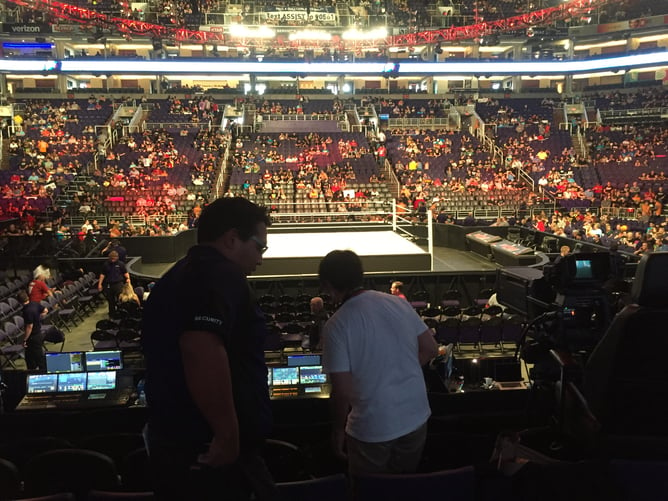 You can Imagine just how excited everybody the last time we went I dressed for the event , its funny because everyone was mocking me telling me that I was going to be hot with my sweatshirt on but it was so cool inside so I actually won that war. I also wore my Paige shirt hoping I was going to see her that night. So once the show started fireworks shot on the center stage then it went straight into which matches would be going on tonight and I saw that Paige was going to fight later during the night. I lost my mind I couldn't believe that I was going to be able to see her fight so close!! before her fight she did an interview and it was really exciting. Overall I would say that this was the best WWE experience I have ever been too just the fact that we got those seats so close I was able to see how great of a performance that they guys actually give. this was truly a great experience

Overall I would say that this was the best WWE experience I have ever been too just the fact that we got those seats so close I was able to see how great of a performance that they guys actually give. this was truly a great experience 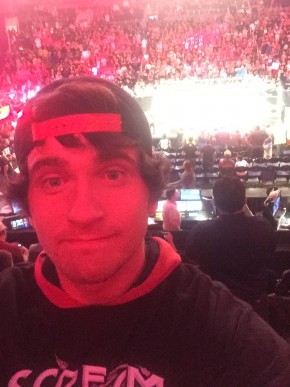