So you've decided you want to make the next big video game. You've played countless hours of the best AAA games on the market and you look at those games thinking "wow they should totally have added this or changed this or made it so you can climb up this corner." Congratulations, you have taken your first step toward becoming a game designer (or at least a game critic haha).

What you may not be thinking about, though, is what it actually takes to put a game like Call of Duty or The Legend of Zelda or Fallout together, and you certainly wouldn't be able to do it alone!

So this blog is going to be a short little blurb of warnings for all you up-and-coming game developers out there (especially those of you who haven't started your college education).

Be Creative, Not Unique and Vice Versa

There's the old saying that no idea is new. Everything has been thought of, if not executed, before. That means that when you're thinking "what if there was a 3D platformer in space?"... well that's a bad example but there are several that could be named off.

Mario... but in SPACE

As you might have seen with all the hundreds of Minecraft clones on the market, a lot of games are not even trying to come up with new ideas. It can make game development seem a bit stale or dangerous at times for people with good ideas.

There's another saying though, that you are the only one with your point of view. That is to say that your ideas, even if the idea itself isn't entirely original, are still your own. Only you have the ability to see those ideas become reality, so don't be held back by "oh that's already been done" and just make those ideas your own!

The number one problem I've seen with many Game Design hopefuls here at UAT is they are all a bit overzealous. A University student, however, is NOT about to make the next big AAA title within the first 2 years of attending a University. Most game developers in the industry don't even have opportunities to do that.

So when you're attending school remember to keep the scope within reason. Indies are simple for a reason, the games take less man-power to create and they can still be just as fun! Building your skills on smaller game dev projects will lead to opportunities to participate in larger ones! 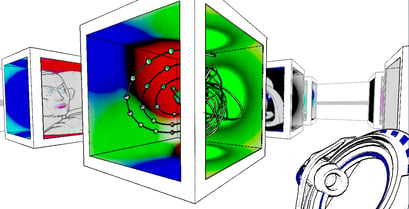 Games like Antichamber were made by teams of one!

Game Jams are great because there is only so much you can do in 48 hours. It demands prioritization of key mechanics rather than a mess of overcomplicated and under-implemented features. They can also be great learning opportunities, which leads to the next heading:

There are literally THOUSANDS of video games out there in addition to millions of players (and non-players) ready to voice their opinions about many of these games. It may seem silly, but if you don't play games then how are you ever going to make one that is fun for others? A lot of the most highly acclaimed games took inspiration from those that came before them.

Of course all play and no work also means no play when it comes to video games. Game development is more than just blurting out ideas, it requires putting them into action. That means practicing those skills is also important! Nowadays there is so much free software on the market to learn the skills. Students can receive educational versions of a lot of software for free (or a highly reduced price), and many game engines including Source, Unity, and Unreal all provide their engines free of charge. Games like Portal 2 and Fallout 4 even have built in level designing elements inside the game itself to fiddle around with.

So don't wait until college to start learning the tools that will bring your project to life!