VR headsets will probably be the biggest new addition to entertainment in the next two years. There are tons of upcoming virtual reality experiences between Oculus Rift, HTC Vive & Steam VR, Project Morpheus, Microsoft HoloLens, and smartphone experiences like Google Cardboard. VR really is the next big thing, and because of the depth of the immersion, in some ways I mean that quite literally.

The Future of Entertainment (at least one of them) 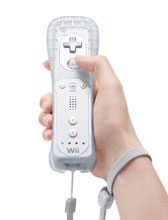 It's no surprise why these experiences have taken such a hold on the tech community. Virtual Reality offers the highest level of immersion since the introduction of motion controllers in mainstream gaming with the launch of the Wii and the Wii Remote (and Nunchuck) back in 2006. Xbox Kinect, Playstation Eye and Move, and Razer Hydra have all jumped on that bandwagon to push that level of interaction with gaming that just isn't possible with a gamepad like the Xbox 360 controller or Playstation's Dualshock.

Obviously a Keyboard is the last thing on anyone's mind for virtual reality controls. There is so much muscle memory and so little freedom of movement that it pulls away from those experiences even further. So the question is... how will we control the games of the future when we can't even see the controller we're using? Well it looks like several companies are finding solutions.

One thing that is a given for virtual reality is this idea of motion as a control mechanic. Strapping a screen to your face and moving around while the objects on screen don't move... or the opposite where you keep your head steady while controlling camera with an external controller or mouse, are both good ways of destroying the experience. Not to mention it is a really easy way to get the player to vomit. So tracking head rotation is essential for basic camera controls.

HTC Vive and Oculus Rift have taken it a step further by adding head tracking. This allows the headset to move the camera within the experience forward, backward, left, right, up, down and any other direction on top of the rotational tracking. In fact, Valve decided if they're already tracking the headset... why not let the head (and by extension the body) move around in a 3D environment the natural way. The IR sensors let players move around in a 15 by 15 square rather than sit stationary at a desk. That allows people to move around the room and interact in new and interesting ways as well, like the demo below:

Of course this also creates some interesting design concerns, like how players will navigate the space. For example, virtual reality stairs cannot be climbed and walls cannot be bumped into without creating their physical counterparts. As you can see in the demo though, it's more than just a game where you walk and look around. Most games have some sort of interaction with button pushes, or physical actions in the case of motion controls.

Interacting with the Future

So what controller is best for virtual reality gaming? Well that's up for debate. Some argue a good ol' Xbox 360 controller will do the trick. Valve and Oculus have made their own motion-tracked controllers for their respective experiences. Both of them look like something you'd see out of a science fiction setting, but obviously that's not too important since you won't be looking at them while you play.

The HTC Vive Controller from Valve 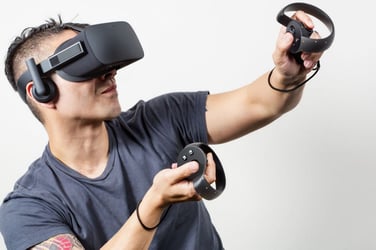 Of course these aren't the only new options. Leap Motion, for example, created a mount for the Oculus Rift so they can use their hand tracking technology right from the headset. That means that interaction inside of an experience (while there may be a disconnect with the lack of physical response) can be as easy as reaching out and touching it. Oculus also recently picked up another company, Pebbles Interfaces, which has their own tracking software which not only finds their location in 3D space, but can actually model them out. Check out the demo below!

While all these new controllers and headsets are exciting, I am also hoping that soon these experiences become a little more stable and a little less experimental. Virtual Reality opens up a lot of doorways to new forms of entertainment (and possibly some for day-to-day life and business as well), but even Valve and Oculus have admitted how different both of their systems are from each other. That doesn't even account for the many other virtual reality startups and experimental headsets that don't have the same level of funding or fidelity.

Yet I am still excited to see what studios are able to accomplish with the technology. We already have an Oculus Dev Kit 2 and a few Leap Motions to experiment with here at UAT in our New Technologies Lab. Speaking from experience, a good VR game is absolutely astounding.