I've been around multiplayer games my entire life. That includes games I played with friends during recess, or the card games I would play with family on long trips. Sometimes it just meant something as simple as rock-paper-scissors or a game of "Slaps" (the one where you slap or punch each other until someone gives in).

Multiplayer games are all around us, both inside and outside of video games. There is something about being able to play games together with other players that makes it extremely appealing when compared to playing games like Solitaire or even one player experiences like Final Fantasy, Portal, or Assassin's Creed. So what keeps us coming back for more? What makes these games something that we can enjoy not just once, but many times? When it comes to video games, what keeps players coming back to your game and not moving on to other experiences? Well in my opinion, it's fairly straightforward.

The easiest way to get people together is on a couch. Nintendo has been one of those companies absolutely dedicated to the local multiplayer experience. Mario Party gets people yelling at each other over small minigames and random chance, where games like Goldeneye 007 with its split-screen gameplay let multiple players not just enjoy playing against each other, but cheat off of each other's screens. Looking at someone else's screen is something that is only possible in local multiplayer, with the exception of the game Screencheat which was designed entirely around that concept. 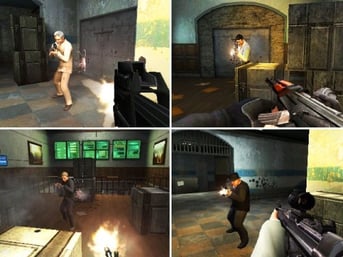 Local multiplayer also increases longevity of games because it's not reliant on servers and matchmaking lobbies like newer online games. That means they can be enjoyed at any time given you have people to play with in-person. It also increases the range of gameplay, like dancing and singing and doing other physical actions and interactions between players.

This is one of my personal favorite topics when it comes to critiquing modern games. Series like Call of Duty and Assassin's Creed are extremely popular... but they have fallen into the trap of too many games and in too short a timespan. With yearly releases, the games lose their individual appeal. Both the company and the players end up giving up on games fairly quickly because there will always be next year's release. The question basically becomes "what could be better in the next game" rather than"what could be better in this game."

Longevity of multiplayer is shortened even further for the same reasons. While it is true there are always a few people playing online on previous iterations of the game (my roommate frequently plays the online multiplayer in Call of Duty: Modern Warfare), the support for servers and patches in the older games frequently die out in order to support the launch of the "new and improved" multiplayer. That also limits how many players you can actually play with, since the audience becomes split over multiple games.

Now this may seem dumb. If the company is wanting to release a video game, they want to make as much money as possible off of the video game. That's just standard business...

Except it's not a good way to draw in new players and keep the old audience around. Usually when a game is released everyone starts with the same number of things to do and modes to play. Later on in a multiplayer game's lifespan, there have been patches, updates, DLC content, and possibly new games like I mentioned above. At that point, the players who can't afford DLC or who aren't interested have a watered down version of what other players have, often without any new content to create more diverse gameplay. The new players are part of this "elite club" who can afford every DLC map pack and weapon pack, and yet because many other players are not part of this group the number of players they can actually interact with generally shrinks as well.

One of many new, free weapons added to Splatoon.

Free content isn't as much of a risk as many seem to think it is. There is no segmentation of the player-base, players who have owned the game for a long time won't get bored of the same old content, and it's great marketing for getting more people to buy the game.

Valve Software provides all of the weapons and characters in their multiplayer games for free (games like Team Fortress 2, Counter-Strike: Global Offensive, and Dota 2). They make their money off of these free-to-play or inexpensive games by providing cosmetic features. Those "elite club" members I mentioned earlier can still get those bonus features of the game without having more gameplay variety and map selections than the other players.

The Conclusion, Not The End

So as you can see, there are a lot of ways to improve longevity inside of multiplayer games. Local multiplayer alone increases multiplayer potential almost indefinitely. Otherwise, we wouldn't still break out Mario Party 3 or 5. With online video games, it has entirely to do with how companies release, update, and market.

I truly hope that the future of video games is bright with gameplay that makes us come back to play again and again, and with all of our friends at our side!