Top 3 Video Game Movies… That are not based on video games.

It’s no new knowledge that the cinematic adaptions of popular video games rarely work when it comes to the big screen. In fact, I was originally going to make a list of the “best video game movies” but found that there weren’t enough decent ones to include.

I think a lot of the conventions of game storytelling revolve around player interaction and when that has to be translated to the screen, writers and directors seem to lose their footing. There are the occasional brilliant cinematic video game moments, however for the most part I’d prefer to stick to movies that are INFLUENCED by video games as opposed to being based on them.

After seeing Hardcore Henry this weekend, below are my top 3 favorite movies that feel like video games (in a good way). SPOILERS AHEAD.

From the very opening titles, Bong Joon-ho’s Snowpiercer has all the calling cards of a modern video game. Dystopian future, confined space and a conflicted hero with limited backstory. All these elements are combined inside a graphically action packed struggle for power in a class based train system.

The train carriages themselves act like different levels, all increasing in strangeness and difficulty. These environments even shift through climate and style with several featuring settings that will be extremely familiar to gamers.  These “stages” present the hero with moral decisions and slowly reveal insight into the story and the protagonist himself. A classic convention of a lot of horror/action based video games.

Tilda Swinton plays an incredibly over-the-top caricature villain who acts as the films catalyst to the lower class revolution and even the “final boss” isn’t revealed to the very end.

Most of the action scenes play out in choreographed set pieces or intense gun battles that allow Bong Joon-ho to show off his stylistic talents. One of my favorite things about the film is that it never forgets it’s setting and even the smallest action moments involve the train somehow.

Amongst the bloodshed, Snowpiecer offers a clever comment on the economic social system by reducing class warfare to a confined train. Like all the best video games, stories with subtext add depth.

Hardcore Henry is the movie equivalent of a First Person Shooter (FPS). Shot entirely on a GoPro’s that were mounted to multiple stunt actors, the whole film plays out in a first person point of view. We the audience get to participate in the story through the eyes of our non-verbal hero.

At the beginning of the film, a robotic Henry is stormed by a telekinetic albino and his goons before he has a chance to install his speech driver. This means that the rest of the film takes place without character voice and instead forces the viewer to project their own personalities on the protagonist. Some may recognize this from the awesome video game franchise Half Life, which uses a similar technique.

The film even features an equivalent of character respawn by having the quest giver Jimmy (played by Sharlto Copley) die multiple times and come back as hilarious alternate versions of himself. This is obvious reference to the concept of character spawning that is so common in videos games.

Even the extras in some of the scene have been outfitted to look like the same person, another reference to copy and paste character creation.

Throughout the film, Henry traverses a wide range of futuristic environments and the movie even features a sequence in which the main character must defend a slowly moving elevator that contains important subject matter. A movie interpretation of the classic escort mission.

This all builds to a gleefully violent final boss battle that has Henry outnumbered by a ridiculous amount of henchmen. It isn’t until a health kit falls at his feet that Henry is able to take a shot of adrenal and kick ass to Queen’s “Don’t Stop Me Now.”

Although the film doesn’t give its females characters much to do and it is juvenile in its humor, Hardcore Henry is for anyone whose looking for a video game styled thrill ride.

1. Scott Pilgrim vs. The World

When I saw Scott Pilgrim Vs. The World back in 2012, it was the first film I ever attended that received a standing ovation at the end. Based on the graphic novel series Scott Pilgrim by Bryan Lee O'Malley, the film was adapted by the hilariously talented Edgar Wright.

The film features a slew of a music, anime and videogame related references along with plot designed in the vain of Street Fighter of Mortal Kombat. Scott must fight his way through seven evil exes in order to win the love of his new romance Ramona Flowers. All of this is done in a hectically edited and totally whacky visual feast.

Each ex that Scott faces provides a tougher and tougher challenge. At one point Scott even receives a “1-Up” as he states that he’s “Getting a life.” Each battle ends with the villain turning into a pile of coins that gamers will be familiar with from the retro video game days. 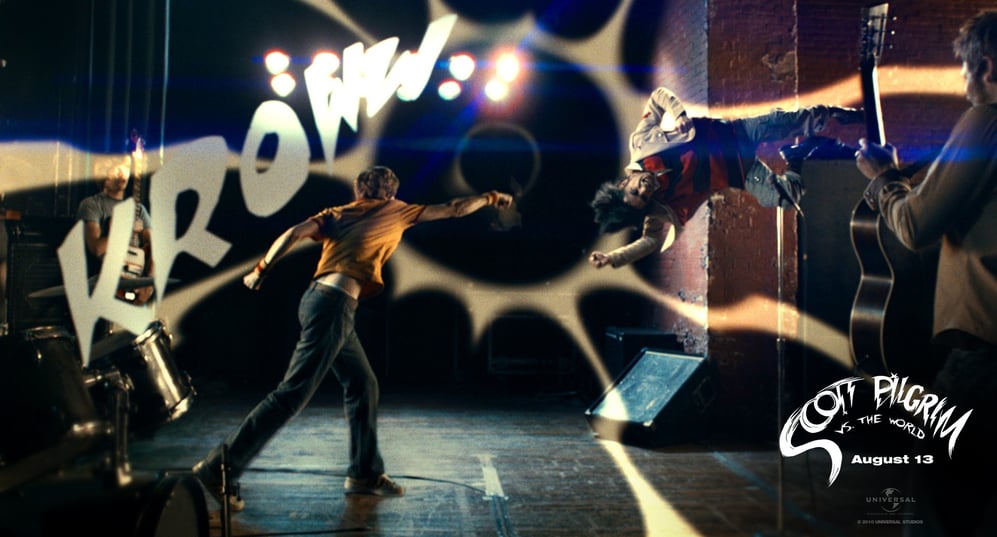 People getting “K.O’ed” (Knocked Out) is extremely common and don’t be surprised if you hear cues and themes from all of your favorite video games. Even the characters themselves talk about games. In an extremely funny scene Knives Chau hangs out with Scott’s band Sex Bob-Omb and asks Young Neil (Neil Young) what he plays, to which he replies “Wow, ummm... Zelda... Tetris... that's kind of a big question.”

Not only is the film a brilliant combination of all things geeky, but it also serves as a nice parallel to the struggles one must face when it comes to aspects of their relationships and the film ends with a nice message about self-respect.

It all also features one of the greatest fictional bands in movie history.

Posted on Apr 13, 2016 10:40:44 AM by Jordan Wippell in adaptions, in Blogs, in Bong Joon-ho, in Digital Video, in film, in movies, in scott pilgrim, in snowpiercer, in University of Advancing Technology, in video games, in edgarwright, in hardcore Henry, in references, in UAT, in vintage