What’s up all my dudes and dudettes! I feel like it’s been a while since I’ve written a blog! I don’t really know what to write about, so let’s go with something safe, like the New Legend of Zelda game Breath of the Wild.

Last time I talked about this game, it had just been announced and we didn’t know too much about the game other that it’s open world. Well now we have a lot more information out on the game! One of the new info is that the game is going to be releasing on the same day as the Nintendo Switch, which is March 3rd 2017. This is means it’s just under a month away and is really exciting since there was a lot of rumors going around that it might be delayed again.

Another thing that is really exciting about the game is that there is going to be full voice acting in the game for all characters other than Link. I’m really excited for this since there has never been any type of voice acting in The Legend of Zelda series. You can see that Nintendo is starting to take ideas from other games like The Elder Scrolls and Fallout series, which has the protagonist silent while the rest of the world has voice acting. This is going to make the immersion of the game go to astronomical levels and I’m super excited for this! 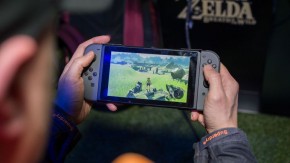 The last big thing that was added was the inclusion of nonlinear open world. Nintendo has stressed that you can choose to interact with this world in any order you want. If you want to go beat the final boss as a level one, go for it! This game is shaping up to be one of the best games of 2017 and I’m hoping that it lives up to those expectations.