Sticking it to the Joystick - Game Controller Elitism

Gaming is... an enigma. There are so many facets of video games that it can often seem overwhelming. Even outside of choosing a video game itself, there are options like the monitor, the console, the internet connectivity, the sensitivity and video settings, and intriguingly enough... the controller. Game controllers are something that may seem like the last thing on someone's mind, but they actually play a vital role in how players interact with the games they love.

Controllers are Adapting and Conforming

Video game systems (in the home at least) have only been around for just over 30 years, yet we have seen time and time again how different controllers can be. There are the 10 buttons on the NES controller and the single joystick or analogue knob used for even older games such as pong. They came in vastly different shapes and sizes and were usually designed for the games which would be built into the systems (as cartridge and disk based games slowly started standardizing game inputs for multiple developers).

However, there's been a pretty steady trend in the way controllers have been designed over the past decade. Companies are diversifying their controllers less and less for a more standardized approach to entertainment. Here is an excellently animated image of how Nintendo has adapted their home console controllers over the years:

As you can see, Nintendo's controller design changes pretty drastically, but taking a look at the Playstation controller you'll see that aside from a couple triggers and two joysticks, the buttons are in the same placement and shape going all the way from the Playstation One to the Playstation 4. That design holds true for Xbox as well. Let me go ahead and break down modern controller layouts in just a few bullet points:

As you can see, the list is pretty short. Despite how short it seems though, that's typically 17 digital inputs (including pressing in the analogue sticks) and 4 analogue inputs (analogue triggers and sticks). There is even variation among these modern controllers, and it does not include touch, gyro, or accelerometer functionality, but it is the standard that the industry has started reaching.

So what's the problem? 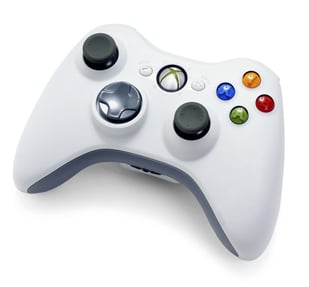 The biggest problem in my mind is the image directly above, the Xbox 360 controller. Now, why am I upset with this controller?

... I'm not actually. The Xbox 360 controller is an absolutely amazing gaming controller. It was designed with great ergonomics, the wired version of the controller is compatible with Windows computers for PC gaming, and the design proves solid with how similarly the Xbox One controller references its predecessor.

While there are certainly features that may be lacking in some controllers, or gimmicks which take away from the experience in others, ultimately the feeling of each controller is unique from another. A great personal example is my experience with the Wii U Pro controller, which by all accounts appears to be an Xbox 360 controller duplicate.

Notice a few of the differences though:

I've heard more often than not that the placement of ABXY on the Wii U controller is an abomination because they do not line up with the Xbox 360 button layout. Umm... while I don't mean to be rude, let me remind everyone that the Super Nintendo Entertainment System had that 4 face button layout (the same as the Wii U Pro controller) LONG before the Xbox 360 controller was released. The Playstation 4 controller similarly has a different button and analogue layout than the Xbox 360 controller. The similarities may be resounding between all three, but the differences are still just as important. That brings me to my next point!

The fact is, controller preference is almost entirely subjective, just like the types of games we enjoy and the platforms we enjoy playing them on. To ignore the differences that make controllers unique is to ignore potential progress, ways that we can change and improve controllers for the better. What may feel the same for someone may feel entirely different for someone else.

The ways we interact with games, just like the games themselves, should constantly be growing and changing to bring the best possible experience. Don't ever feel like something is the "ultimate and final solution" because there will inevitably someone that views it a different way!

Posted on Oct 22, 2015 3:47:21 PM by Admin in Blogs, in gaming, in playstation controller, in video games, in game controllers, in Human-Computer Interaction, in wii u controller, in xbox controller