Perhaps one of the most frustrating parts of any project (game projects in particular) is that if you are trying to create a plan for anything you have to include the fact that things will go wrong.  You could have a plan that directs every last person in every single action, down to the last second but if you don't plan for problems to arise then you might as well throw the whole thing away.  It could be human error, be pieces just not working how you wanted them to, pieces not working together well, or just some random act of Cthulhu but something is going to hold up the whole project.

It's something that frankly all UAT students are taught, but it's also one of the most easily forgotten rules both in school or just out in the professional world.  Most of the time then after something goes wrong people will wonder how it all went so terribly wrong and it's because they didn't allow time for errors.  What will happen is this:  Everything is moving along smoothly, then you hit a minor hiccup and probably won't think to much of it, fix it and move on with your life.

Then you hit another minor hiccup and do the same thing.  This will happen a few more times until suddenly you're behind, because even though they were small problems they ate into the time you had planned.  Then "IT" happens.  The big show stopping crash that brings everything to a screeching halt.  There's nothing you can do but fix it, but that's going to take more time after you're already behind.  The only thing you can do at this point is not panic and just get the work done the best you can but most people just tend to freak out.

Chances are you won't be able to avoid falling behind or even the show stopping crash, but you can at least deal with it a little bit better if you allow time at the end to make sure everything is working the way it should.  Just plan time for "bug fixing" or "error checking" at points and at least that way when the little hiccups happen they're not eating into the time of something more vital.  If by some miracle then you don't have any issues during development then "oh no I've finished early... What will I do with all this free time??" 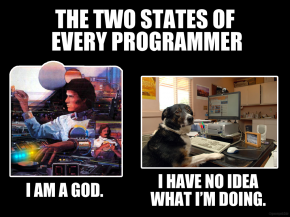