There seems to be a lack of understanding when it comes to creative works.  Whether it's just finishing the creative work in question or implementing new features; people seem to think that more people working on that project means the work gets done faster.  The truth of the matter though is that this is actually far from the case.  This isn't limited to just video games, but in fact most of the entertainment field.  While it's true that projects with larger scopes will have larger teams that work on them, this doesn't then mean that adding more people will ensure the project is completed sooner.  So in reality, adding people to a project only really helps if you were either short handed to begin with or you realize your scope has greater needs than you can currently fulfill.  Moreover, the larger the scope gets typically the more specialized members of the team become.  So when an issue arises in one department, that doesn't mean that people from another department can help solve the issue any quicker.

In many ways it's like being a chef.  If you're making food for just yourself or your immediate family then there's a good chance you may not need any help.  In fact, having more than one other person helping for a family meal can actually hinder your efforts rather than help because even if space isn't an issue (which it often is) then you have the problem of too many people doing to many different things to form a cohesive whole.  This idea is where the phase "too many chefs in the kitchen" comes from.  It doesn't matter how talented the individual members are, if the whole experience feels like a a disjointed mess. 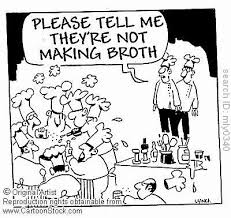