Kill Bill or: How I Learned That I Wanted To Be A Filmmaker

I was never allowed to watch violent movies as a child. My mother did such a good job scaring me away from them that when my friends would ask to watch Child's Play at a sleepover, I would lie and say I’d already seen in it.

I remember being at my Grandmother’s house when my sister brought over a DVD for her and my Mum to watch. The bright yellow case featured a large black stripe and a cool looking blonde woman holding a sword. I would later go on to know that familiar DVD as the case for Kill Bill: Volume 1. At the time though, I vividly recall having the urge to watch whatever film was inside and it wasn’t until a few years later that I finally saw it. 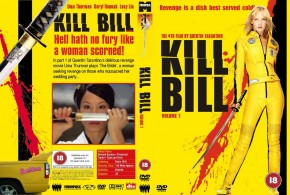 I was staying at my sister’s house in Melbourne and going through their large DVD collection. The bright yellow case once again caught my eye and I knew now that I was old enough to watch an R-rated movie… and get away with it.

That night, while everyone was asleep, I watched Kill Bill: Volume 1. As a young teenage boy, I had never seen such a cool, stylish, violent movie. Little did I know that Kill Bill was the accumulation of older cinematic nods that I would soon come to discover myself. These homages were were all tied together into an action/kung-fu/anime masterpiece.

As the film played before my eyes, I experienced what some may call an “artistic awakening”. The more of the film I saw, the more I started seeing the strings being pulled. For the first time in my life I realized that every prop, actor, line of dialogue, effect and shot were all the vision of a creator. I saw all these elements coming together for the betterment of the story. Suddenly the walls of the film were broken down and I discovered the choices of an artist.

When the film finally cut to black in the early hours of the morning, I put the DVD straight back into the player and watched it all over again. It was safe to say from that moment onward I knew what I wanted to do with my life. I wanted to create that, whatever that was. Kill Bill: Volume 1 was the gateway to my filmic obsessions.

It wasn’t long before I had watched every Quentin Tarantino movie and my knowledge of film had started to grow. Soon I had to urge to make a short film of my own. In 2008 I made my first ever short film, below is an extremely embarrassing combination of all my teenager inspirations:

Looking back now I realize that the Kill Bill films are not a particularly profound duo, nor do my current interests align with them as much as they use to. However, Kill Bill: Volume 1 represents an idea and a dream that I will always strive towards. It will forever remain my favorite film of all time because it was my introduction to the art of cinema and it reminds me of what is possible when you combine passion and creativity (#deep).

Like a stereotypical film student I will end on a quote from one of cinemas greats...

"If it can be written or thought, it can be filmed." - Stanley Kubrick

Posted on Mar 3, 2016 1:38:48 PM by Jordan Wippell in action, in advancing technology, in art, in blog, in Blogs, in Digital Video, in dvd, in film, in film maker, in kill bill, in kung fu, in masterpiece, in movie, in Student, in the bride, in uma thurman, in University of Advancing Technology, in anime, in film making, in short, in tarantino, in UAT, in volume 1