I'm ready to Switch over ;)

What's up my dudes and dudettes! So I couldn't wait to write this blog today! I need to get my thoughts out on this while its still fresh on my mind. Bear with me hear while I fanboy out for a bit!

So I don't know if any of you have looked (and if you haven't you need to), but the new Nintendo Switch was just revealed this morning! I have to tell you its everything I thought it would be and more! We have been waiting to hear solid info on the system since over one and a half years ago when Nintendo first said that they were working on a new console. That's why it comes as such a relieve to finally hear and see some solid info from Nintendo on the NX aka Switch.

So now lets dip into some details about this beautiful beast! The first thing you might notice about it is the fact that the console itself is actually a screen. Now its not confirmed to be a touchscreen, but there may be a chance that it is. In my opinion though I think Nintendo should just move away from that tech and just focus on the straight up game play.

The cool thing though is that Nintendo seems to be doing that! The Switch is powered by a custom NVIDIA Tegra processor which includes an NVIDIA GPU that is based off their high performance graphics cards. You actually see in the trailer the Switch playing Skyrim Remastered, which needs a NVIDIA 760 to play at recommended settings. This game is going to be released on PC, PS4 and Xbone One on October 28th and I can't wait to get it on the Switch. 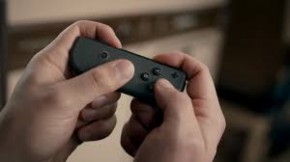 Well for now I'm just going to stop there. There is so much more to talk about when it comes to the Switch, but I think I'll just save that for another blog. Til then peace!