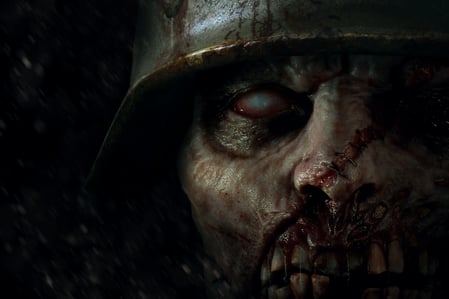 Hello! and Welcome today is a wonderful day and that being said I'm excited to see that Zombie Chronicles has finally released on PlayStation and will soon be released on Xbox One. Call of Duty Zombies has been a huge part of my middle school/high school years endless rounds if bullets and zombags. I remember picking up my copy of Call of Duty World at War and enjoyed the campaign but then after I completed the campaign I saw that it unlocked a game mode called Nazi Zombies so I figured why not and started playing and immediately I was memorized by the game mode. I mean who wouldn't love fighting off hordes of zombies with all the older weapons like the PPSH or Type 100 and lets not forget about the MG 42 the even added a weapon called the ray gun which was just some fun and possibly the best gun at the time that map was called  Nacht der Untoten. I don't Treyarch realized what they have created but it was genius and would later would still be going on today in 2017.

Then I remember being in English class and my friend Chase told me that World at War just released a new map pack that supposedly added another map, this got me so excited and after school that day me and my brother Jeffery slept over Chase just because it was Friday and every time we slept over chase we would get to stay up as late as we wanted to and just more freedom so after he
purchased the map and the Map was called Verruckt  and at the loading screen we saw vending machines and the locations of Zappers which were electric barriers. when we spawned the game both of us where on separate sides and the only direction we got was you must be reunited by the power. that was one of the fun things about this map was finding out things and where they were

located. We found out that the vending machines were called perks and gave you certain abilities the list of perks that showcased in this map was Juggernog which gave the player extra health so
instead of two hits by the zombies it takes five which is fantastic then you had Speed Cola which made you reload faster again amazing! then you have Double Tap this perk allowed you to shoot
faster and lastly my favorite Quick Revive this allows you to heal you teammates faster. On this map you have to go through basically trying to find the mystery box which in the first map its only behind one door and never moves! In Verruckt  this was the start of Mystery Box moving around the map.

that didn't disappoint this was the map they added and extra trap called the Flogger and this thing was badass it was a giant trap with two logs on the ends covered with spikes. Not to mention this was the first time we are introduced to the Group 935 Tank Dempsey, Nikolai Belinski , Takeo Masaki, Edward Richtofen. Dempsey had to be my favorite just his choice of words was constantly creative and funny not to mention he would swear almost all the time and he would give the zombies all their nicknames like Zombag, Meat bags, Marrow Maggots , and Bone Junkies. not to mention they added another "Wonder Weapon" as they are called this was the Wunderwaffe DG-2

Then the last map pack was insane from what Chase was telling me about teleporters and upgrading weapons! This got my inner zombie killer pumped once we got to Chase's house we both bolted

down to his room and booted up zombies and i was confused at first like your suppose to be every time a new zombies map comes out. The map was called Der Riese this translated to The Giant. This map was this best so far they added explosive monkeys that would attract the zombie then blow them up what more cooler then that.  Then you were able to upgrade you weapons which helped this also gave them a sweet skin. This was the best map to survive on and the most played although Verruckt is my favorite map this is right next to it along with origins.