In order to graduate UAT one must complete a Student Innovation Project or “SIP” for short. This project is intended to push innovation in the various degrees and inspire students to try to do something new.

It was only two weeks into the class when Co-Creator Brandon Scott and I came up with our Student Innovation Project “Help Falls.” Being huge fans of “Choose your own adventure” style books and horror moves in general, we decided to combine the two. You can find more detailed information about the project here: https://www.facebook.com/helpfalls/

Almost half a year later we just wrapped principal photography on our first of six short films “Malice.” A Japanese Horror inspired ghost story that takes the protagonist on an emotional journey through an abandoned hospital.

Just what the Doctor ordered!

On January 24th shooting began with Brandon Scott in the director’s chair and me behind the camera. The rest of the talented crew was made up of Digital Video students and other friends.  Shooting started slow, however once we found our footing we were well on our way.

We had multiple setups in numerous locations throughout the hospital and due to the time constraints we had to shoot as fast as possible. The ever talented Ronin operator Mike Myers was utilized so that we could shoot longer takes and thus cover more ground. The Ronin rig is a self-stabilizing camera system that helped achieve smooth, cinematic shots. This was to enhance the horror and create a ghostly atmosphere in the already creepy hospital. 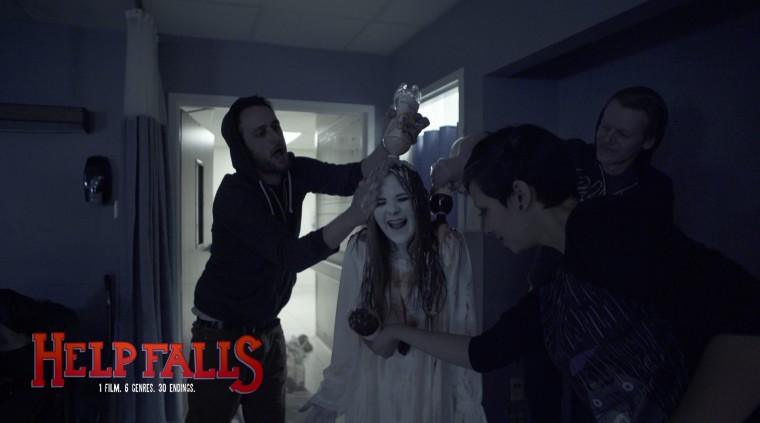 Moments before the infamous birthing scene...

Shooting a short film is hard enough on its own without adding multiple decision paths, so I’d be lying if I said that the filming wasn’t confusing. We spent numerous hours creating a highly complicated shot list that was in order of priority and actor availability. It was important to us to see how these dynamics worked while shooting so that we could refine them for the next film. Although problems arose, we solved them as we encounter them and by the end were speeding through scenes with ease.

The following is quote from co-creator/director Brandon Scott about the Malice shoot:

"A short film in of itself is a arduous and involved process and adding a decision tree with multiple script branches did not make anything easier. We as the creators had to keep a uniformed vision and composure during the process as well as an even and approachable demeanor. Even though not every actor, crew member or teacher could see the complete vision, we could rely on the trust we built with not only each other and the various projects we have done together, but also the trust and skill of those working around us and our instructors guidance."

In the early hours of January 31st we completed principal photography. Our main actors Andy Cooper, Kathleen Benner and Amelia Haberman all did a fantastically creepy job under the direction of Brandon. We couldn’t be anymore happy with how the footage has turned out.

The cast with the creators

We still have to complete some pickups shots and begin editing, but we are well on our way to making Help Falls a reality. Next up is our noir/home invasion short film “Not Guilty”, another path in the ever growing tree that is… Help Falls.

Posted on Feb 24, 2016 4:06:48 PM by Jordan Wippell in Blogs, in blood, in Choices, in director, in film, in filmmaking, in ghosts, in help falls, in j-horror, in malice, in movie, in needle, in not guilty, in student film, in Student Innovation Project, in birthing, in Horror, in hospital, in interaction, in japanese horror, in SIP, in writer