If you are a fan of gaming, you may also be a big fan of E3 (Electronic Entertainment Expo). I'm sure every Student Ambassador will give you their take on what they saw at E3, jsut like what I'm about to do. This post is going to be about all of the games that I am most excited about after watching all of the E3 conferences.

I've never played any of the Fable series but this game makes me want to. Graphically this game looks amazing and right up my alley. The fact that in multiplayer someone can be the designer and enemy while the others can fight through the level seriously appeals to my D&D side. This is a great way to play. Essentially you as the creator of the level know how your friends play and can make the game so much more challenging than any game they might have played before.

The Rise of Tomb Raider:

Now I have to get this one out of the way. This is literally my favorite series. I was raised on Tomb Raider and I love every game that has come out in the series. Seeing the first gameplay trailer blew me away! The amount of improvement from the 2013 version is amazing! I've read a little before about how they created this game and I am completely amazed. November 9th at midnight you will most definitely see me in line at GameStop picking up my collectors edition copy of the game as well as an Xbox One to play it on.

I have always been a big fan of the Assassin's Creed series so I am definitely excited for the next one to come out. I am even more excited to finally be playing a female lead character!

Now I am not a first person shooter (or the third person view, first person controls) but this game looks amazing. Graphically realistic in so many ways and lets be honest...it's Star Wars.

This game looks gritty, realistic, medieval, and very violent. From what I've seen of it, this game is right up my alley. I like some of the new gameplay controls they have going on so far. I look forward to seeing more of this game in the next couple years.

Horizon looks amazing! This post-apocalyptic game looks like a game I could spend hours on. From what we saw at Sony's press conference it looks like a game that requires a lot of thought and strategy to get through. I would like to know a little more about the story, but I am really really excited for this game.

I have no words to describe my excitement for this game. When I saw the lifestream on the side of the screens at the Sony Conference I just KNEW that this was coming. This game will absolutely be amazing. I am anticipating more information about the game and when we might get our hands on it. I can see this now being one of the most anticipated games until it comes out. There are so many directions this game can go in and I'm excited to find out. After this game was announced nothing in the conference could ever hope to be more exciting. It's time to prepare myself to cry due to seeing Aerith dying once again but only in complete HD.

The World of Final Fantasy:

I am a huge fan of the Final Fantasy series! Seeing this adorable game if just what I needed to satisfy my hunger for more Fantasy RPG's. I can't get over how cute and adorable everything is and how much I want everything in this game! 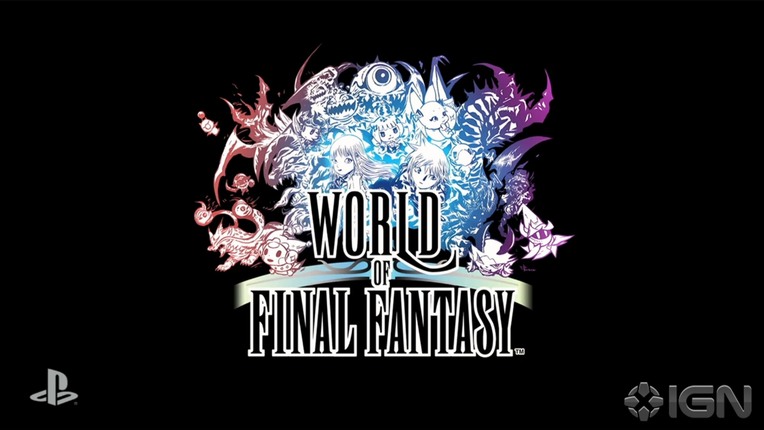 I am a huge fan of the Tomb Raider series, and when I started playing the Uncharted series I fell in love. I absolutely adore this series and am so happy Naughty Dog is making a sequel. Uncharted 4 looks amazing so far. From what I read this game is extremely detailed and the entire team was very through in their jobs. I have read that Drake has over 60 different animations for just picking something up from the ground. We haven't heard much of the story, but I know this one is going to be good. I honestly am a little disappointed at the fact we didn't get a release date. Uncharted 4 has been in development or at least in the works for quite a while now. As of now we have 2 gameplay trailers as well as a demo of how the game was created. I would hope to see a release date soon.

Now I have seen this a little bit of this game and how it plays, but I don't have a WiiU to play it on. I do have a 3DS and am super excited to play this game on it!

This game, much like Uncharted 4 has been in development for quite a long time. I was very disappointed at the lack of a release date or even an estimated time frame to be expecting the game. All that aside this game looks amazing. I am a huge fan of all the Kingdom Hearts games and the fact we are finally getting a third official installment is making me extremely excited!! This game has improved drastically! It's safe to say that the CGI graphics from the first and second games are at the same if not lesser level than that of the gameplay in 3.

This mobile game looks really good so far. Square-Enix has published a couple of mobile games for Tomb Raider and have been slightly successful. This game is a newer and better way to play as Lara Croft on a mobile platform while keeping the base of what Tomb Raider actually is.

Once again we get another mobile game for the Kingdom Hearts series! The first one didn't do as well, and from what it looks like, Square-Enix has improved a lot in this department. This game looks fun and cute.

Well that's all of the games that I am looking forward to after watching the conferences at E3!