Dragons here, there, in E3 and a Theater near you!

For any of you Gamers out there, I'm sure that you were very intently watching E3 this year as much as everyone in this school, and even myself! For what it's worth, seeing the conferences that are presented is quite the experience, seeing new titles being released, or those that would follow in the series be hinted at. Now unfortunately there will be no Half Life 3 as of yet, but there's still hope! And with the more recent releases of trailers and gameplay, getting a next gen console has never been so appealing for me!

I never really claim to be any sort of die hard console gamer, sticking mainly to PC as I pay my tribute to the annual Steam Summer Sale, but for what it's worth, Nintendo has always been at the top of my list for video game productions such as The Legend of Zelda, or Super Smash Brothers, and this year, they delivered something fierce into the playing field for the Wii U. Now although I'm not as excited for Hyrule Warriors as my Dynasty Warriors friends, what I am excited for is the concept of an OPEN WORLD ZELDA! 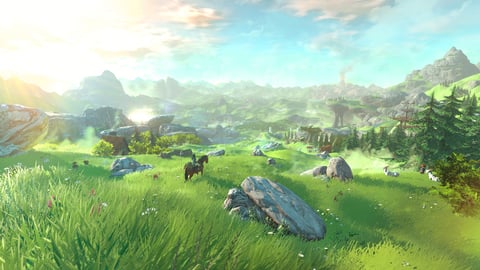 See those mountains in the distance? You can CLIMB them!

After a while since seeing a new release of a Zelda game for a larger console such as the Wii, let alone the Wii U, this was a fantastic sight to see, because not only does the game look lush and surreal, but it aspires to have an open world environment where you decide how to tackle the objectives, while still having a finite storyline, but in a less linear sense.

Aside from Zelda, Super Smash Brothers 4 continues to astound everyone that follows Nintendo, especially opening their conference up with Reggie fighting Iwata using their Mii characters, following up with Sakurai with details about the game itself. Smash Bros is expected to release in October, so be prepared!

Nintendo President Iwata as his Mii along with the staple to the Nintendo Franchise, Mario!

Now these are by no means the only highlights of E3. Microsoft and Sony I didn't particularly care for, but for what it's worth, Ubisoft had an incredible conference with the upcoming releases of many games I would find appealing, such as bringing back the Rainbow Six series in an incredible simulator, Assassins Creed Unity or even Far Cry 4! Another game I'm looking forward to is Dragon Age Inquisition, but that's still a little bit of a ways away, but I still can't wait!

At this rate, I'll need at least one of every major console, so the struggle of savings begins!

On another note, How to Train Your Dragon 2 came out yesterday, and I had the luxury of being able to go today to be able to see the movie in IMAX here at the Arizona Mills Mall down the road from the campus.

For anyone interested in the fantasy series of movies, with amazing animation and a storyline that will leave you broken at the end (all of the feels Q-Q), then this is the movie for you! The movie is a fantastic sequel to the original How to Train Your Dragon released in 2010, which takes place around 5 years since the acquisition and companionship of the Dragons that used to terrorize their home. The character development was phenomenal since the progression between the movies, and by the end, my friends and I were stuck in awe at what had happened across the course of the movie.

Personally I love Dreamworks, and really just any animated movie studio or anyone that produces such films, and as a fan of the series, I highly recommend it to the point that I want everyone reading this to go see the movie right NOW.

Across this past week, I've personally seen the release and hype for everything that will be coming out in the technology industry, not only in gaming and film, but in what will eventually be released for the public in the late 2014 - early 2015, and I couldn't be happier. And in two weeks, my friends and I will be heading off to Anime Expo to party it up at one of the largest events held in the United States encompassing Japanese Culture including Anime, Manga and an appreciation for everything Asian!

So until then, keep cool inside and out of the 100 degree heat, play some video games and go see a movie about dragons! I promise you won't be disappointed!