At UAT we try to have professionals from the industry come in to talk to the students when possible.  It's a really cool opportunity to meet some of the people who have actually done all of the things that we one day hope to do ourselves.  No matter what discipline they're in though, there remains a pretty consistent theme among all of the professionals: they went above and beyond what other students around them were accomplishing.  To perfectly clear, this isn't about having a 4.0 GPA because some of them even admitted they were kind of middling students.  A high GPA absolutely never hurts, but it's about much more than that.  I'm talking about putting an epic amount of work into the things that you will eventually show off to your employers in your portfolio.

Grades are good because they give you at least an idea of the kind of work you are putting out but they don't give you the whole picture.  An 'A' can mean anything from "Absolutely Outstanding Industry Quality Work" to "Very Good Work that easily fills all of the requirements of the assignment."  It's not that the grading scale is broken, because everyone here is a student and is still learning.  Both of those things are obviously good, but if you were to present that same work to an employer later I promise they really won't care that you got an 'A'.  Most of the time the real difference between those two points is the amount of effort the person put into their work.  Even the really talented students, if you talk to them you will often find that they're putting in 2-3 times as much time and work into their pieces than almost anyone else.  One of my game design professors, who has actually worked in the game industry will tell us regularly:

"The game industry, especially in AAA developing is filled with talented people.  They're looking for people who are willing to do the insane amount of work that will be required.  They're looking for people who have mastered the basic skills you need to have for them to teach you to do even more.  Practice those skills while you're here, and do as much work as you can.  You will never look back and say 'I wish I hadn't worked so hard.' "

People in game design often think that they're going to be good at game design because they've been playing games their entire life.  That they don't need to practice those skills as much because they play every day and they "know" what makes a game bad.  Let me dispel the illusion for you right now: playing games your whole life doesn't mean you will be any good as a game designer.  You think people who have made bad games don't play games?

Every single person on the planet has been eating since the moment they were born.  In fact, I guarantee that your total time spent eating eclipses the total time you've spent playing games. Playing games makes you no more of a Game Designer than eating makes you a Master Chef. 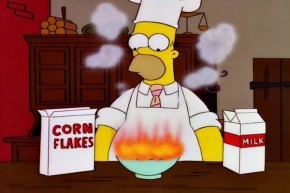