Who needs plot when you have shoujo drama aquatic mammals? 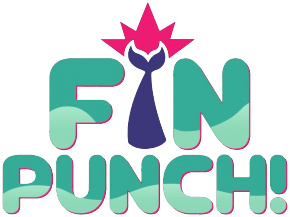 Basically, take all your crazy dramatic shoujo anime full of love and drama, mix it with aquatic sea mammals hell-bent on world domination.

That's it. That's the whole thing. There is romance, villainy, and beautiful sea mammal men. It's a hilarious exaggeration of anime stereotypes in a crude, but charming, western style of animation. The best part is you can watch every episode in a row in only 30 minutes. The content is definitely PG-13 so keep that in mind.

Cartoon Hangover, the youtube channel which hosts Fin Punch and a myriad of other cartoons not seen on Television, opens up a lot of opportunities for their animators to play with different content and visual styles. Fin Punch is one of those examples that really shows off how something can be over-the-top but still have a deep underlying moral (in this case, some references to the recent criticism of SeaWorld's captivity of dolphins including orca).

It's another example of mature themes in 2D animation outside of satire shows like Family Guy and South Park. There is still story progression and plot, but unlike Over the Garden Wall it is clearly not as much the focus as the sheer absurdity of what is going on.

Fish Punch can be really painful to watch because of just how exaggerated everything is, but it's also hilarious and full of good action, drama and romance.