All Aboard the Hype Train: Pokemon TCG - Roaring Skies

For today's iteration of All Aboard the Hype Train, I bet you all thought I would be covering only online games or games that are on consoles only huh? Well if you remember back to my first post about Bravely Second, I had stated that I am covering "games", which can encompass a broad selection of media!

For what it's worth, games are more than just video games. There are board games, tabletop games, card games, and so many more as well! And for today's blog, I will be talking about a game that some friends and myself have been playing most recently.

Being the president of Pokemon Club has its perks. I enjoy the Pokemon series to a point, where I love the games, and the movies, however I do not care much for the TV show as of late. One thing I can appreciate though is the card game. Beforehand, I would simply collect the cards when I was younger, however more recently I have actually taken the time to try and play the card game as well!

Last semester for club, for Pokemon Club, we were only focused on battling in the games. This led to some fun overall, however we were known as the Pokemon Battle Circuit. This semester, we are now the UAT Pokemon Club, where we will focus on other matters!

If you have been keeping up with the trading card game at all, the past few expansions have added in a whole new spectrum of cards and meta to work with overall. For myself, I tend to use the cards from the XY series, focusing on XY, Flashfire, Furious Fists, Phantom Forces and Primal Clash. 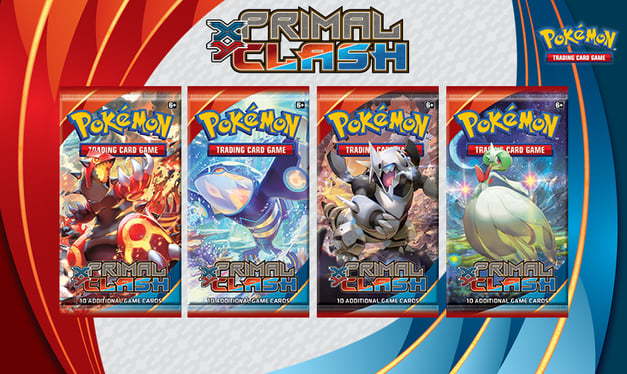 For my first deck, I have Grass/Fairy deck that I am using, since the Chespin deck was the first one that I had bought in the series. For my second, I am running a Water/Electric deck, making full use of the Rough Seas card to give myself an edge in battle.

However, on May 6th, the next expansion, Roaring Skies, will be released to the US.

What does this mean?

Well it means that we will finally have a dedicated Dragon set that will feature various Pokemon such as Hydreigon, Dragonite, Zekrom, and most importantly:

Rayquaza is known for his mega evolution now, not only because he's really cool looking, but rather he is utterly game breaking for the video game. Smogon has come up with various tier listings on how powerful the Pokemon are in game, however when we have tiers such as Overused (OU) or Uber, we have the Rayquaza tier, as he has broken the tier listing on his own.

You can find the article about Rayquaza and his new status: here

The same could almost be said about the card game as well.

Mega Rayquaza seemingly has two iterations across this set. One of them has Dragon Ascent, the other having Emerald Break. The Dragon Ascent card requires 5 (five) energies to utilize the attack, however it will end up dealing 300 damage at the cost of removing two energies from him. 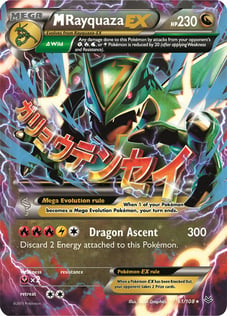 What this means is that you can slap on a double energy card onto him, and use the attack again at no penalty. What it also means, is that after tallying in weakness/resistance, he can deal an upwards of 600 damage, or as little as 280 without any tools or equipment being taken into account.

The steep energy is meant to offset this power, however he has a lot of bulk, and with a low retreat cost, you could swap him out and load him back up if you wish.

Given I'm still a novice at the game, we have been working to try and build competent decks with the cards that we have available. For what it's worth, the Dragons have been under-appreciated because it is difficult to try and get them up. They have interesting energy requirements, since there is no official dragon energy as of right now, requiring various energies ranging from fire and electric, to even grass and water. With the new expansion, the dragons are going to receive a little bit of love, and I am definitely going to try and build a deck out of the cards provided.

Having a Dragon deck would definitely be cool, as they were already one of my favorite types anyways in the game, but with this, they might finally receive a little bit of a break, or could potentially be even more powerful than we can initially anticipate.

Overall: 7/10 The game is fun, and with friends it is even more so. The art on the cards is incredible, especially if you manage to pull a full art card out o f a pack. Keeping up with the newest meta or packs can prove difficult and expensive though.

Posted on Apr 20, 2015 9:48:48 AM by Admin in Blogs, in games, in Geeky Stuff, in student life, in Student Life, in tabletop games, in card game, in game reviews, in pokemon, in pokemon tcg, in trading card game