Selfies are a little bit less technology focused than most of my posts, but I think a lot of individuals would benefit from these 4 reasons of why to take selfies.

In simple terms, a selfie is just a photo taken of the photographer by the photographer. Originally this would require a timer, or holding a camera out at arms length with the viewport/screen facing away. This made getting good shots more of a gamble, especially with automatic focus. I remember when I got a Samsung Convoy (the phone shown below) which had an extra screen and closed to make the camera face the viewer, making selfie taking much easier... though I don't think they had a name for it back then.

The point is... selfies (or the concept of selfies) have been around practically forever! 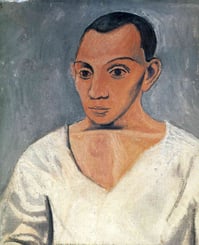 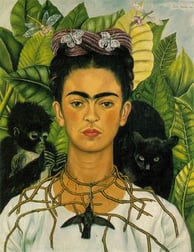 The most famous "selfies" are not photographs but paintings, though with the invention of the camera and film, it became available to everyone... not just those who could effectively paint their own likeness.

So why take selfies? What's so great about something that usually involves shirtless pictures in the mirror, or a girl with Starbucks? Time to get edumacated!

Alright, so let's say you're really excited about something. Maybe it's a new game or you just bought your favorite burger from your favorite restaurant. Yeah? Cool. That's great. You put some exclamation points in your Facebook status or a quick Tweet.

Maybe you're trying to make a joke, but nobody understands the elaborate pun that you wrote and just passes it by.

Maybe you want to text your gal pals about your new lip-gloss because it's crazy hot pink.

Maybe you're like me and make an awful decision to get Starbucks and Chipotle at the same time. 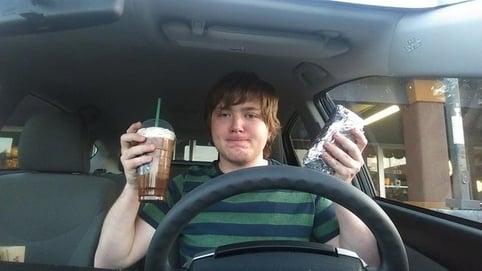 As t' was famously said: "A picture is worth a thousand words." There are nuances to expressions that don't make it into the written language, specific inflections and tone of voice that are missed. True excitement is easy to empathize with when it's seen, just like how hearing or seeing someone yawn can cause someone else to yawn. It makes the message that much more impactful and interactive.

Of course, this may not be true for everyone. Taking selfies is often considered narcissistic, psychopathic, and several other interesting adjectives.

For me though? Selfies have been a way for me to be comfortable with how I look, how I act, and how other people see me.

When I know other people are going to see me, I start wanting to take better care of my health and my wardrobe... but on a daily basis sometimes I can forget that I haven't showered or brushed my teeth because I don't have a mirror 24/7. It makes me excited to show off if I get a new shirt or do my hair a different way.

I also do a lot of smiling in these photos! That doesn't mean forcing yourself to smile even when you're unhappy, but it does mean sharing that joy with other people. Just like yawns, smiling is contagious.

There's only one way to get better at something, and that's practice! Selfies, just like all art, have a composition and lighting. Changing around expressions, or creating dramatic lighting, can really make a photo pop! You might start noticing how overcast skies create very even lighting or how rim lighting can really accent forms (fluorescent lights in UAT, for example, make my hair look green when I have my blonde hair).

Not to mention, if you're an artist like me the best reference you have for expressions is... well... yourself! Professional artists and animators do this all the time!

Photos last a long time, especially in the digital age. They can remind you when you were happy, sad, excited, and upset. They show you how far you've come since the time they were taken. I know my grandma loves seeing photos of me so she can keep up with what's going on in my life.

The conversations I have with people where I take photos instead of just responding with text always mean a ton more to me, almost like we really were able to talk to each other in person. My friends usually get fed up with me, but they're too busy laughing to tell me to stop usually.

Just a week ago I went to the graduation ceremony for my friend Ashley and several others who I've had the pleasure of attending UAT with over the years, and maybe in 10 years I'll run across this picture and remember this moment and all the excitement and friendship that came with it. Little moments like this can mean the world.