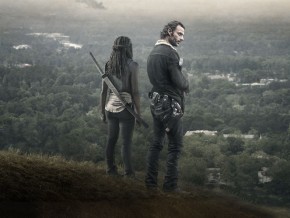 Hello everyone today I’m going to talk about one of my favorite shows of all time and how they introduced the legendary Negan. Recently the Walking Dead season 6 concluded on last Sunday and the show delivered. Watching the promo on Friday sent me into a craze just wanting more and more of the beloved show. When I turned on the finale the whole episode was an intense rollercoaster ride this was one of the times that I didn’t get spoiled. Getting spoilers for the show happens a lot and this is because my friends watch the show a good 2-3 hours before me since I watch it here at 10:00-11:00. But I made sure for this episode that I was not going to be spoiled I wanted this to be a treat and enjoy the chill factor of not knowing what happens or who dies but I did go in the episode knowing that someone was going to die by the barbed beauty Lucille. For those comic fans we all have a pretty good Idea of what’s to come with Negan’s Saviors and Rick’s Alexandrians.This episode had to be my favorite, I think that’s because ever since the Saviors name

surfaced in the show I knew it was a matter of time before true evil showed its grin and this meaning Negan. Negan is one of my villain’s period and now that they brought him for the comics and bring him to life in the show, this is where the show takes off. The lucky actor they chose to portray the chaotic villain is Jeffery Dean Morgan. Negan in the comics is an insane vulgar charismatic manic, every word in the comics is a f-bomb AMC announced that unfortunately for the true Negan you’ll have to wait for the special Blu-ray. To me every piece of dialogue for Negan is simply amazing they almost make it impossible to hate him which I think is very good writing. When a TV show introduces a villain and you struggle to hate them because the character is so well written. As of now season 6 is my favorite and not only because of Negan but so much has happened this season with great and strong character development.