Tech Forum is happening soon at UAT! We're bringing in a bunch of speakers to talk to us about all kinds of projects and things happening in the industries! Check out our blogs for information about the speakers we have coming! 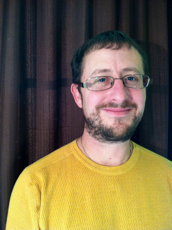 Derek Iversen is a writer, actor, and quite possibly the greatest kazoo player of his generation. Derek has written 60 episodes of SpongeBob SquarePants, an obscure television show, as well as other fun shows for kids, like The Penguins of Madagascar, Teen Titans Go! and currently, Sanjay and Craig. He is co-creator and co-writer of Carrot & Stick, as well as the voice of Carrot. In his spare time, Derek is an environmentalist, bicycle adventurer, and master guacamolean. Derek wants to be your friend.

Attend, if you will, as Derek Iversen, a Comedic Writer, attempts to explain, with a straight face, the mechanics of good comedy writing.
What is story? What's a character? How many fart jokes is too many? Listen and learn.
Do not be afraid. Actually, come to think of it, go ahead and be afraid. You should be.