So this weekend I bought Assassins Creed Unity. I'm a big fan of the series and have played all of them. I was a little hesitant when buying it because when it was released I had heard a lot of negative things about it. When I got it I was pleasantly surprised on how good it is. 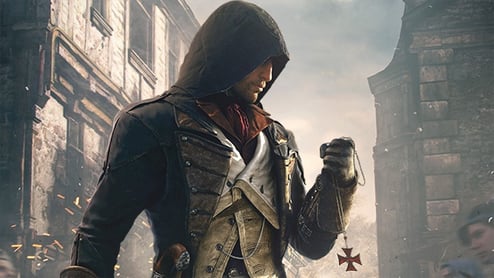 Now I'll admit one of the main reasons I bought  this game is because I'm a sap for the whole star crossed lovers thing. Yes, go ahead and laugh; I'm a sap and I know it. 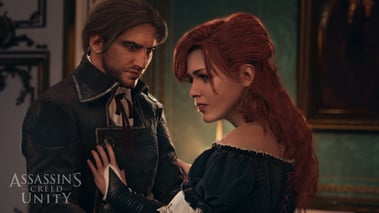 As I said I was pleasantly surprised about how well done the game it. Compared to the last game the graphics are immensely better. The cinematics and game-play look almost exactly the same. There is plenty to do in this game. If you want to take a break from the story you have a wide variety of things to choose from. You can do all kinds of missions, or you can search the map for all of the treasure chests hoping you find a gold one that has an additional outfit in it. I mean seriously, look at this map:

One of my favorite things about this game is the character customization abilities. In the past Assassin Creed games you have been stuck with about one or 2 outfits to choose from. In this game the gear you buy is what you'll wear. The downside to this is that if you don't have enough money to buy and outfit that matched you'll look a little weird. But to make it better they added a feature that allows you to wear past assassins outfit. You can unlock all of the other main assassins outfit and Arno actually looks pretty good in most of them. Another cool feature is that if you buy an outfit that you really like you can actually save it to wear over the gear you are currently wearing.

So far The game-play is exactly what you would expect from an Assassins Creed game. They added a nice feature that allows you to safely climb down a building. Now this is really helpful if you're like me and have a tendency to jump off of buildings when trying to climb down. This saves you a LOT of health. It's nice to see Ubisoft adding in a few new animations to Arno's climbing and descending techniques. In this game I actually feel like I am playing as a different assassin than Edward or Connor.

Posted on Apr 7, 2015 10:47:27 AM by Admin in arno, in Arno Dorian, in assassins creed, in assasssins creed unity, in Blogs, in games, in gaming, in Geeky Stuff, in student life, in Student Life, in Elise, in Unity