Flatiron: Do You Dare? 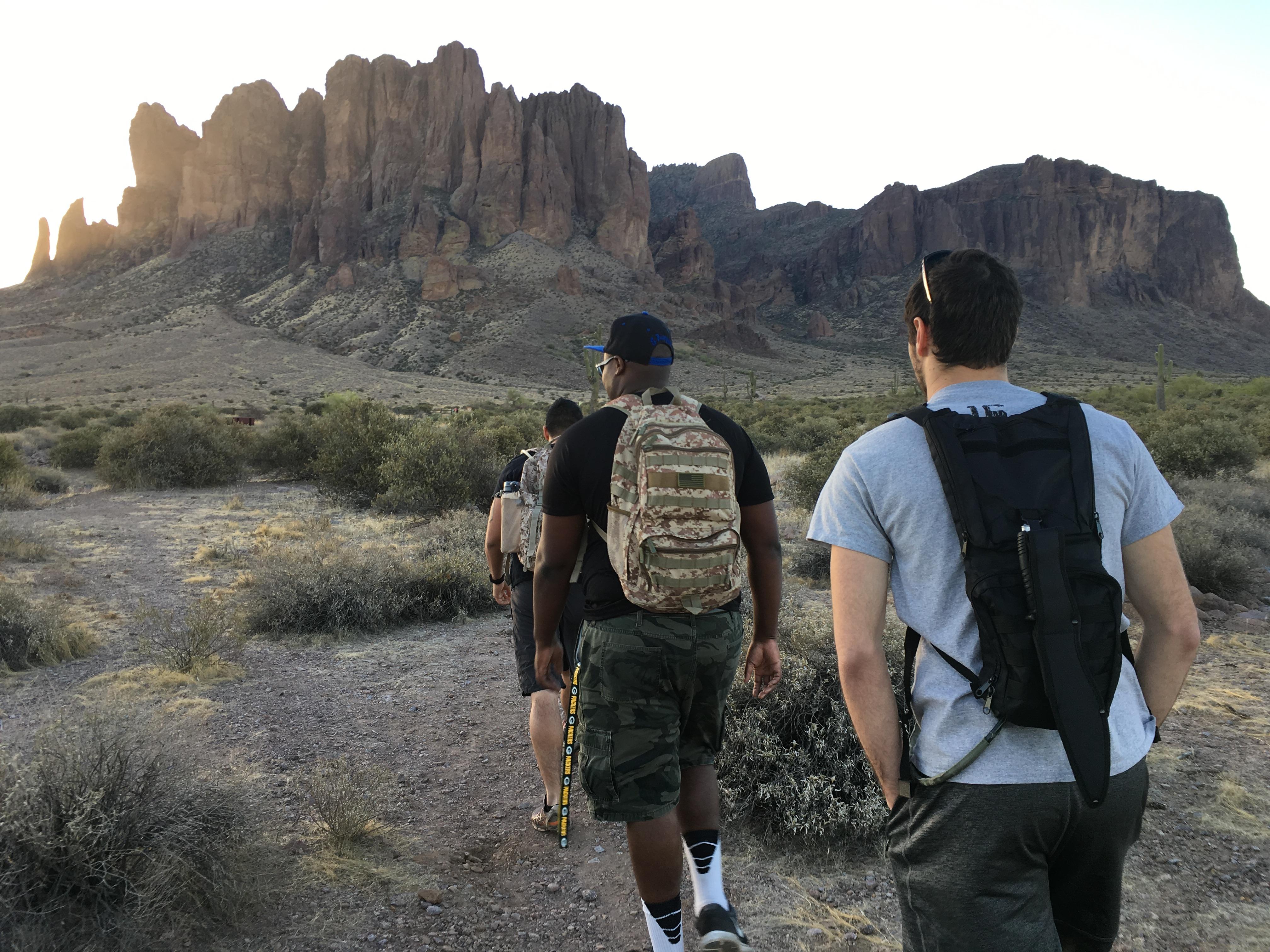 Flatiron is an incredible hike! About 40 to 60 minutes east of UAT is the Superstition Mountains, which is where you can find this hike. Make sure you pay attention to the signs that say Siphon Draw (the trailhead). Honestly though, I should've prepared myself better for this hike through proper research. I went in not thinking much about it, and I even brought three of my friends along. 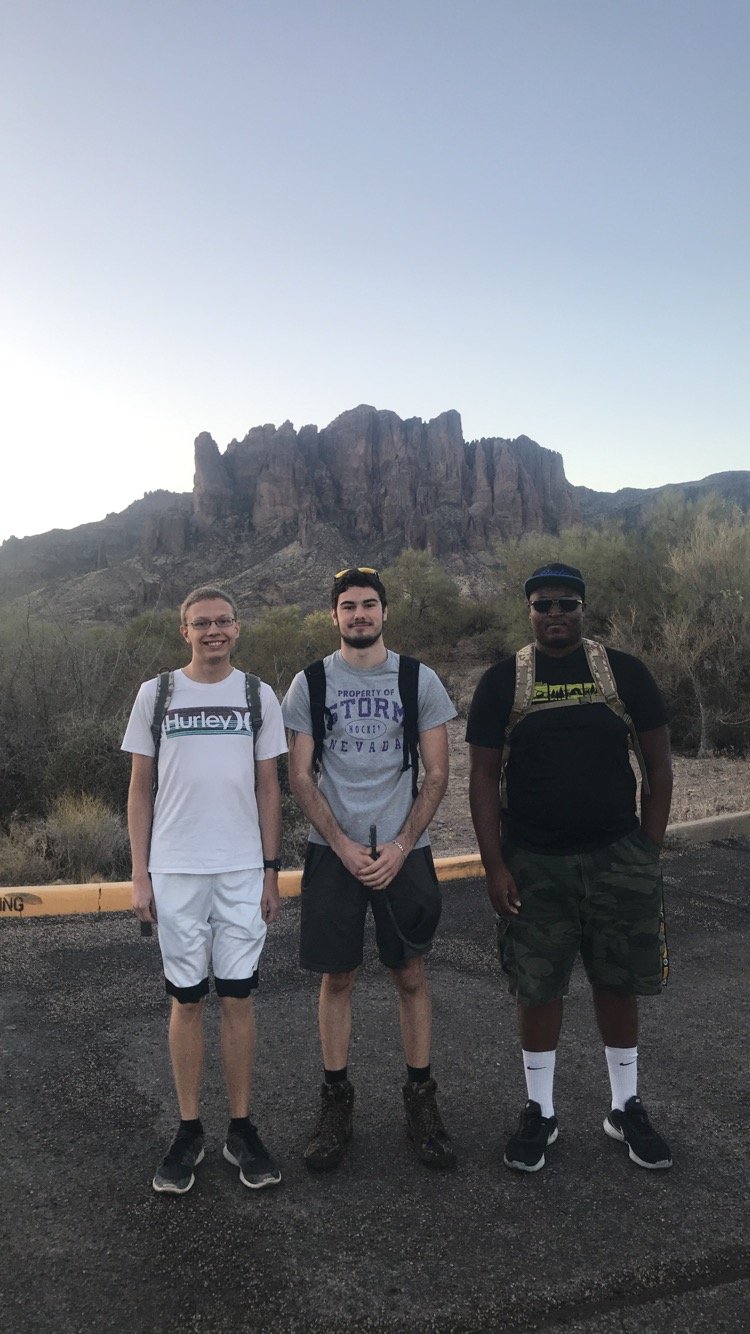 From left to right is Chris, Steve and Stanley. Chris has already graduated UAT and was actually the valedictorian this year! Steve works in the bindery here at UAT, and Stanley is going to be a tutor soon for the school. Of course, I'm Rocky, one of the Student Ambassadors. 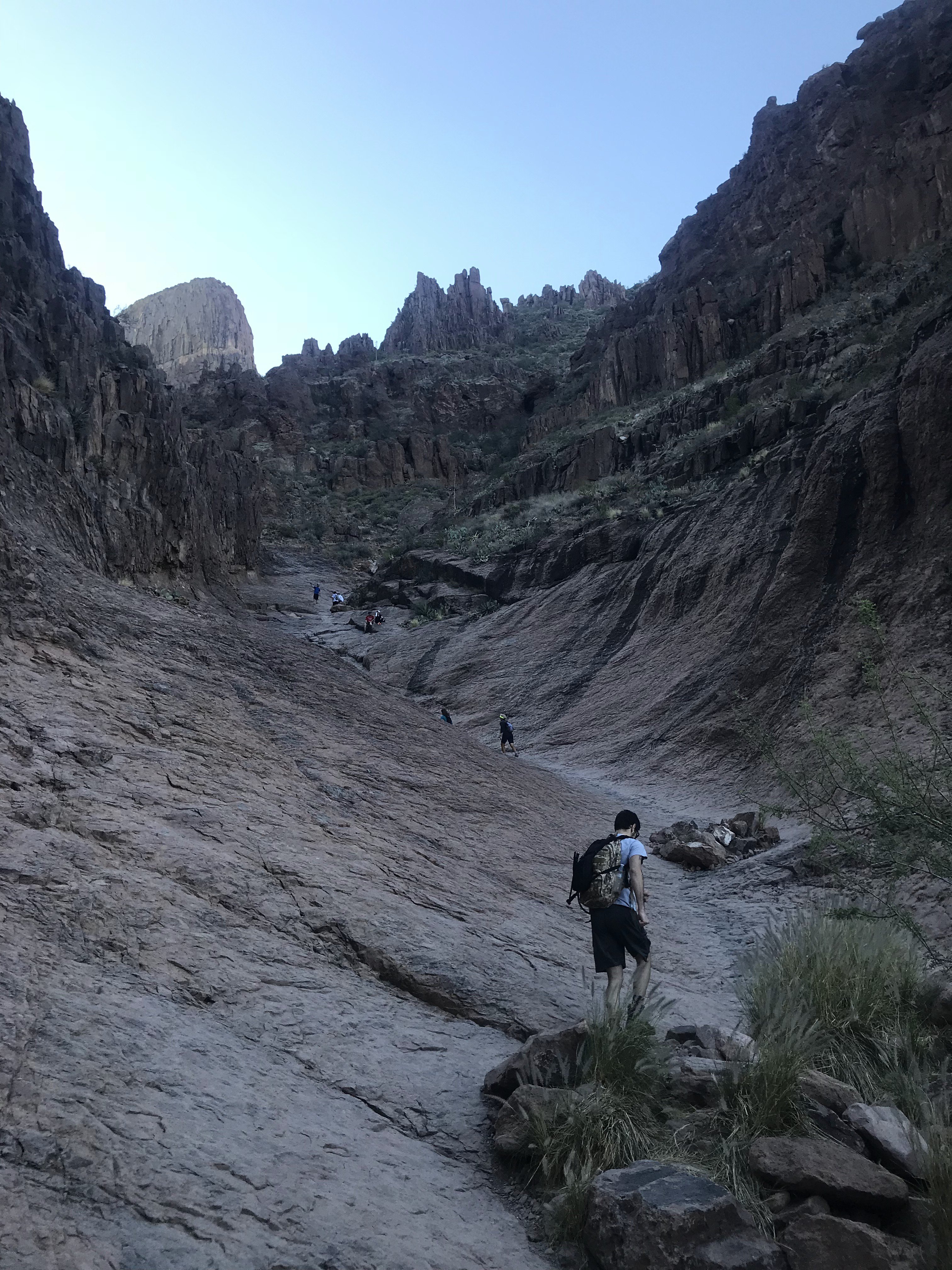 A word of warning: Don't do this hike if you're not in good shape. This is a hike that's difficult both on the way up and down. If you're uncomfortable with heights, definitely stay away. Always watch the weather as well. If it's raining here or if it's too hot, I would recommend choosing a different day. 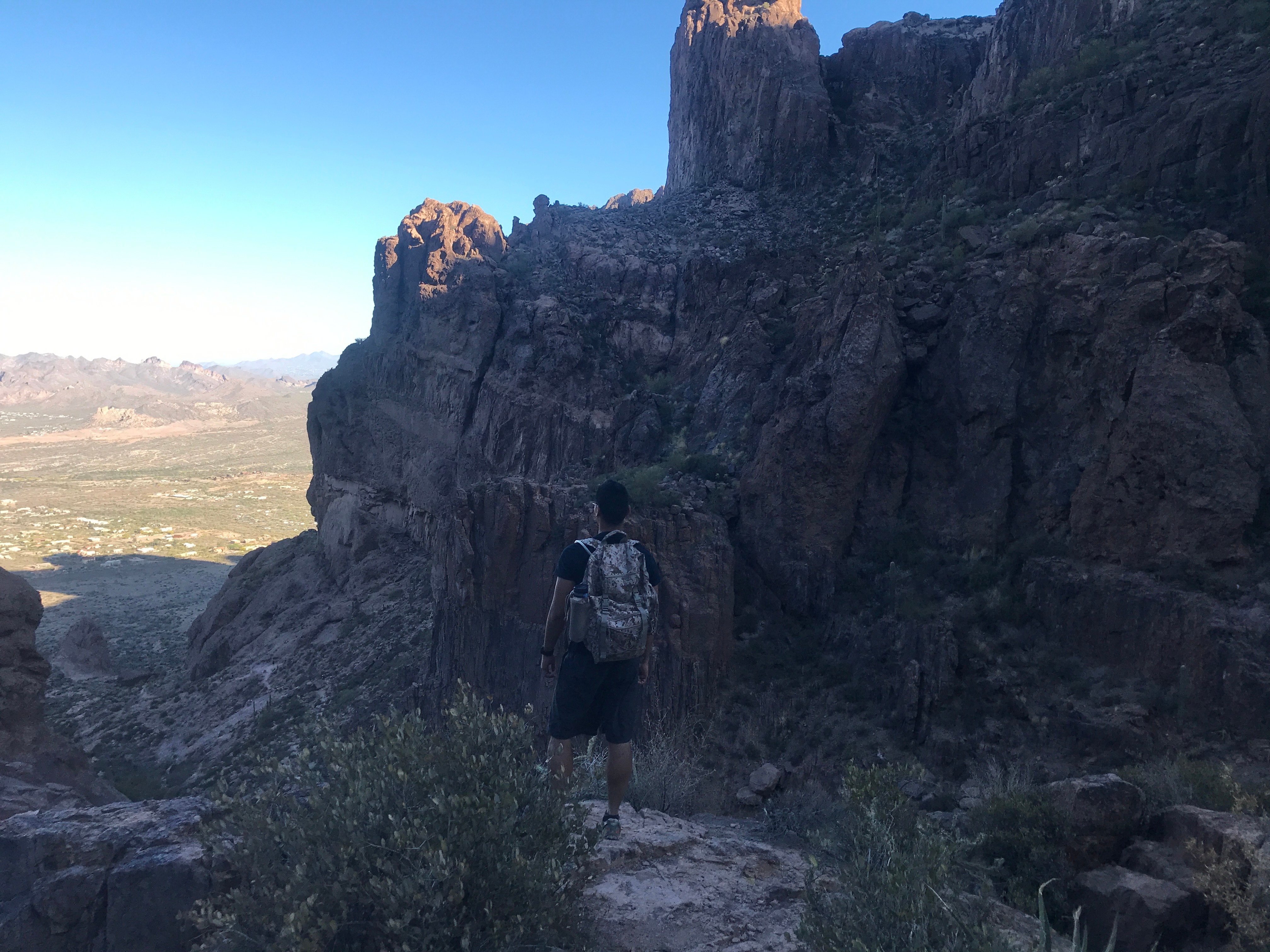 The trail can be treacherous. Make sure that you're wearing good shoes that have decent treads on them, or even hiking boots. There are many parts where the rocks are loose or don't have any grip, so you can start sliding down pretty easily. On a lot of parts for this hike, footing is crucial, so be mindful of where you're stepping. 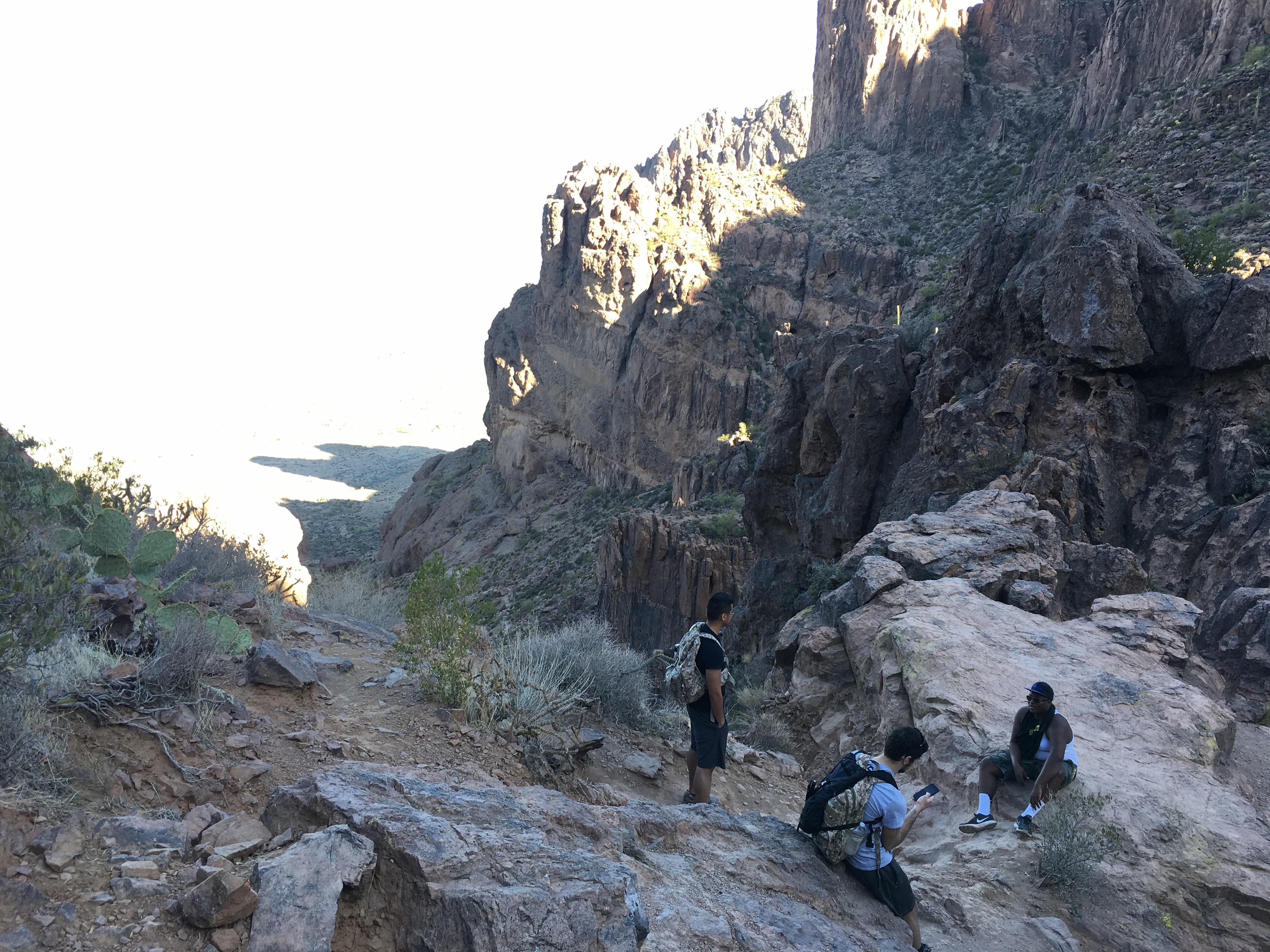 It's also easy to get lost. Trust me. We did. You'll need to look for white circles that mark the traill. (I didn't actually know about these until I was already on my way down!) They'll guide you the right direction. I went up the wrong trail, but I forged on, eventually making it to the top. My friends decided the trail I took was much too dangerous and found the right path after following the voices they heard. 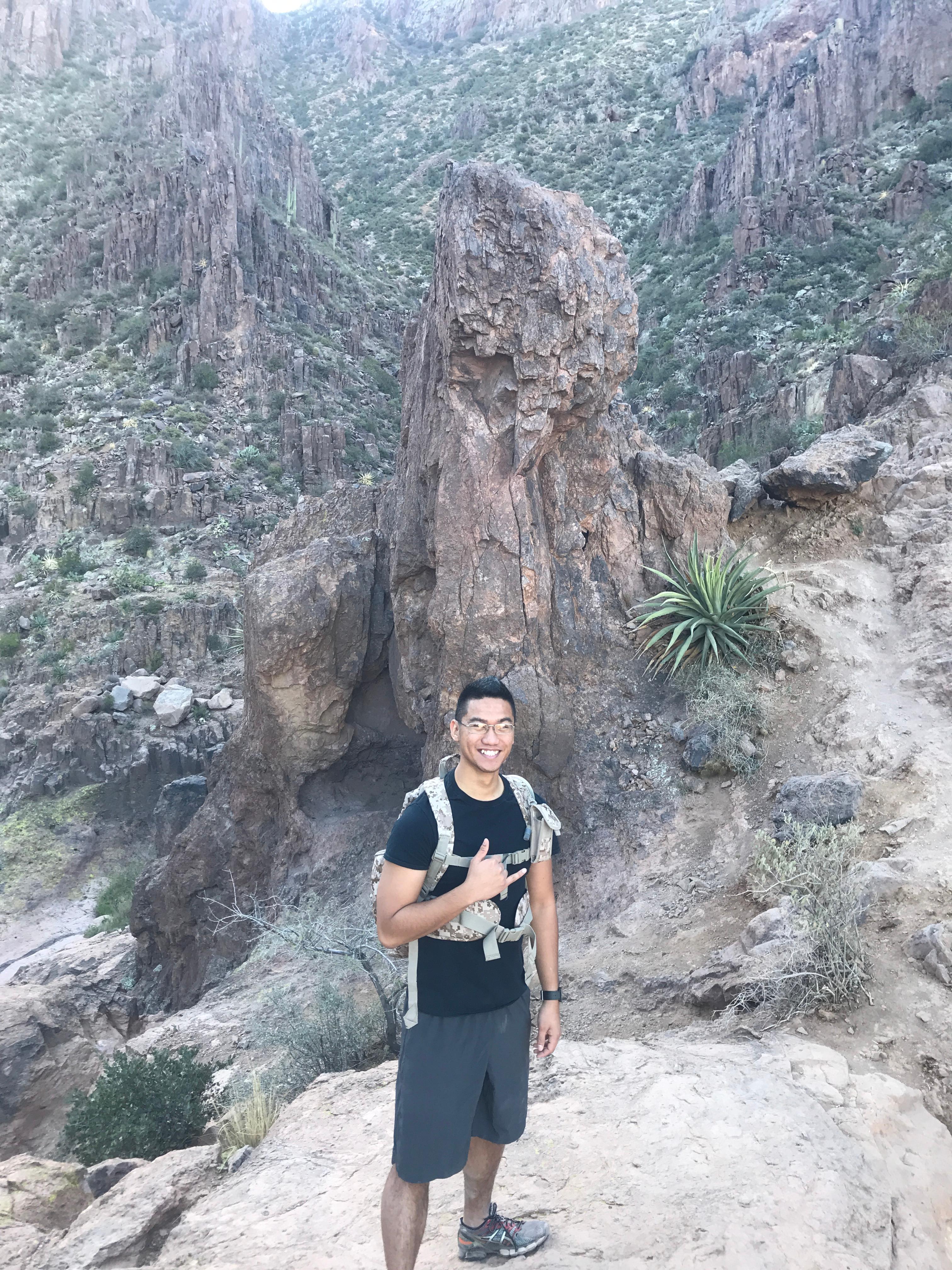 I, however, was much too impatient to find a different path. The peak was just so close and I wanted to get there, so I continued up the trail I started. This part of the trail had a large amount of loose rocks and to make matters worse, it was on a slope.I started to slide off. In an attempt to save myself, I grabbed the nearest thing I could. Unfortunately, that thing was a cactus vine!

It's been a few days since that hike, and the feeling of the cactus needles piercing my hand is still very fresh. When I think about it now, my hand tingles and I cringe. I can feel a chill up my spine, and I end up opening and closing my hand repeatedly. I was pierced by many of the spikes, but I only had to remove about four of them. I have undoubtedly felt worse pain, but there's just something about needles literally piercing your flesh that stays with you for a while.

Even after all of this, I couldn't stop moving because I was still in a bad spot. My hands were bleeding, but I needed them to climb. Once I got to a relatively flat area, I opened up my backpack, took out my first aid kit, and I stopped the trickle of blood. Needles are sharp but thin, so they heal pretty quickly. 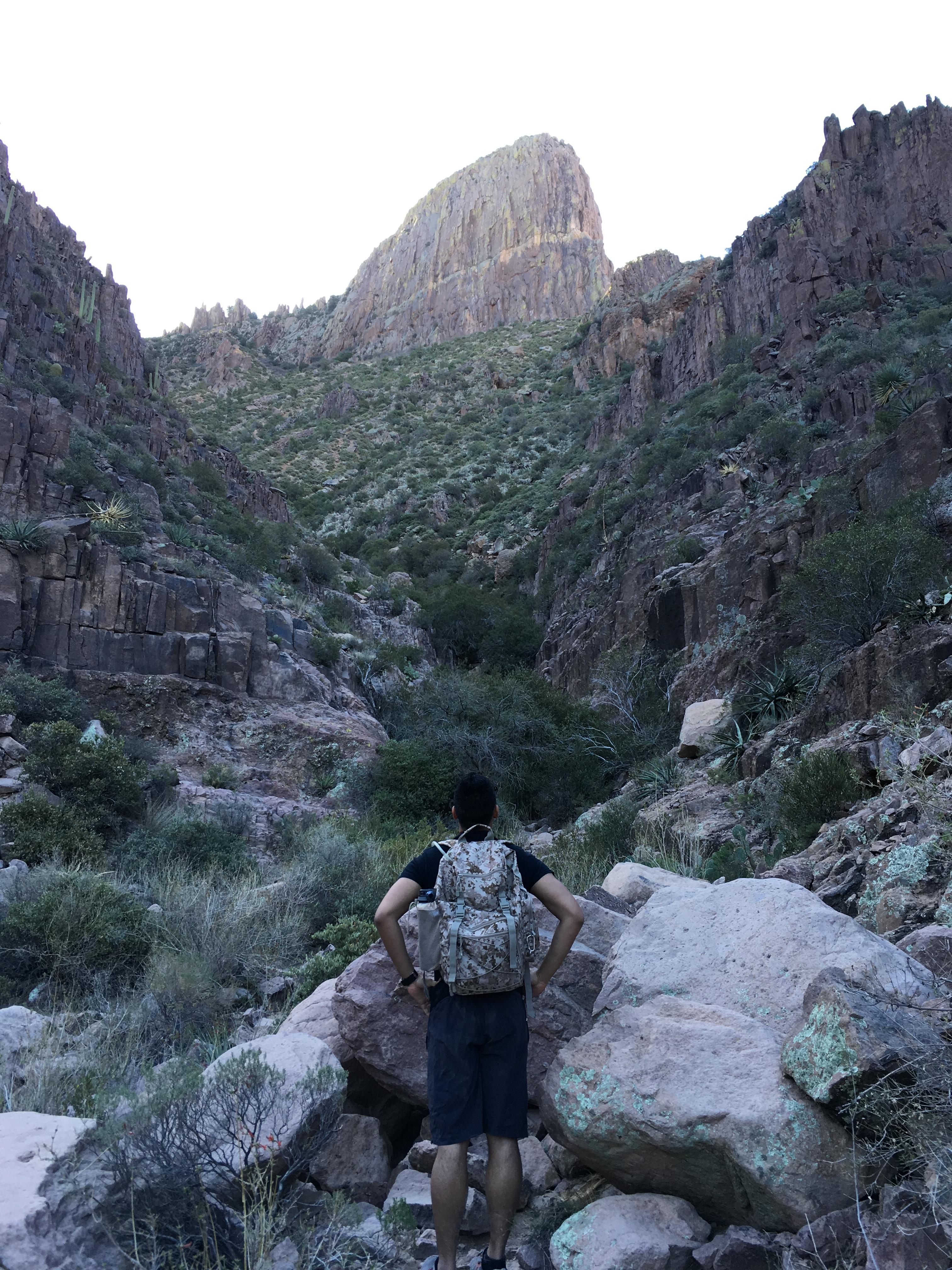 From here is basically when I realized I was on my own. I didn't want to backtrack and find the other trail, which is what I saw my friends doing. I saw the people I followed up keep going the same direction, so I decided to forge on. 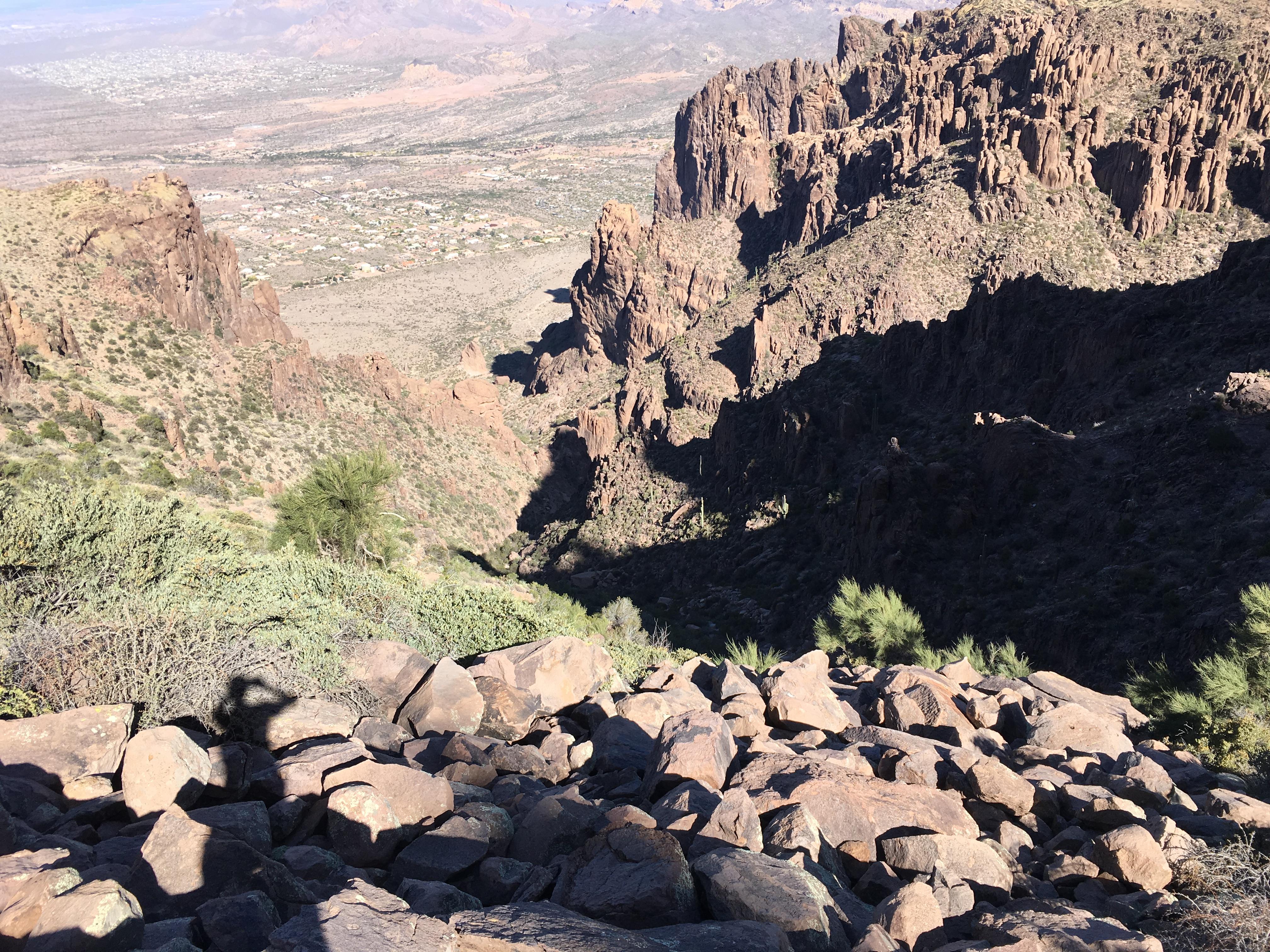 While waiting for my friends, I ended up losing the people I followed. I kept making my way up when I finally reached a wall. I stared at the side of the wall for a while, wondering if it was safe to climb, until I decided to see if there was a different path nearby. To my extreme left, and what I realized was the right path, I could see many people climbing up a more "natural" looking trail. They were still basically climbing the wall, but it looked much, much safer.

This is when I realized there was two choices. One, I could backtrack All the way down and find the right trail. Two, I could climb the wall in front of me. Of course, I climbed the wall.

It wasn't as hard as I thought, but if I slipped, nothing would catch me. I would literally tumble all the way down, probably getting pierced by every cactus on the way. But, this all only occurred to me later. I didn't have a single other thought in my head other than to finish what I had started. And it was worth it. 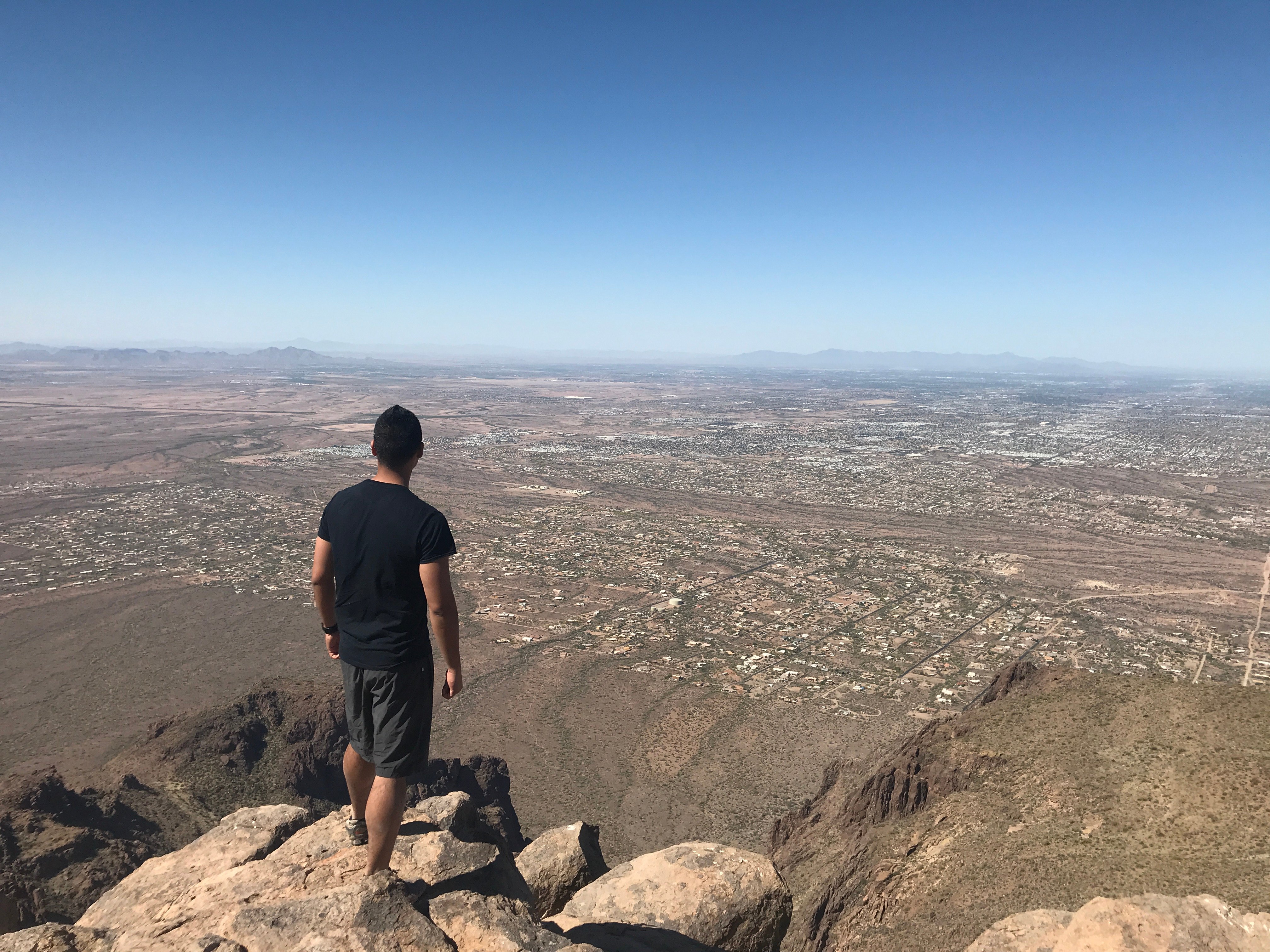 The view is beautiful. You can see the city below, and you can see just how far you've come. I had made it up there alone, it took my friends 10-20 minutes to finally reach me. Unfortunately, Stanley didn't make it all the way, but he made it about 85-90% there.

I thought downhill would be a lot easier, but it's actually a lot scarier. My friends had come up the right trail so I followed them back down. It turns out that the "right" trail is still sketchy. We took our time going down, it would have been ridiculous if we got injured on the way out.

The hike, despite a few incidents, was 100% worth it. I loved the view, enjoyed the exercise, and I was glad to have my friends with me. Would I do it again though? Would I make a trip anytime soon to once again experience that beautiful view? No. No I would not. 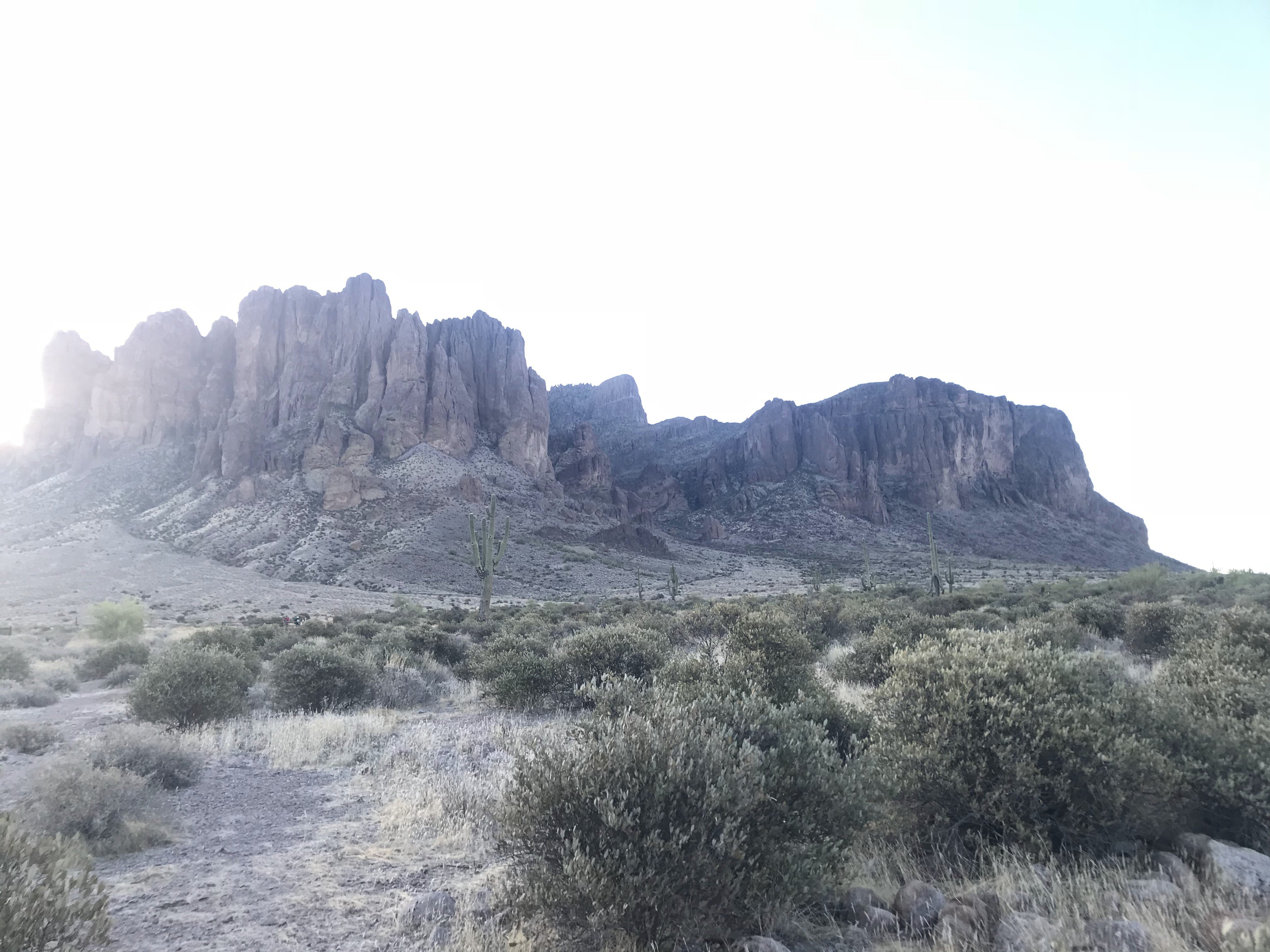 Always remember to back lots of water, wear good shoes and do your research!