Starting out my final semester, it feels great to be able to partake in a course that allows me to explore my personal interests. Starting Creative Writing II, I can’t explain how excited I am to come up with new ideas, but I am also looking forward to seeing what students who are new to the course will produce.

Simply put, I’m revving up my writing skills once again. AT UAT, we have the opportunity to explore whatever literary elements or styles we want to. Specifically, I like to geek out about fantasy and science fiction. That's why today's post will cover the flashiest and most experimental aspects of fiction that captivated me as a child: the “super” element.

What do I mean by the “super” element? I define it as the extraordinary or supernatural aspects and abilities of a character. Immediately, you’re probably picturing superheroes from the likes of Marvel and DC comics. That’s what adolescent me would first picture as well, and you're not wrong. But there is much more. Superpowers, augmentations, mutations, magic—all of these things are considered supernatural or extraordinary. 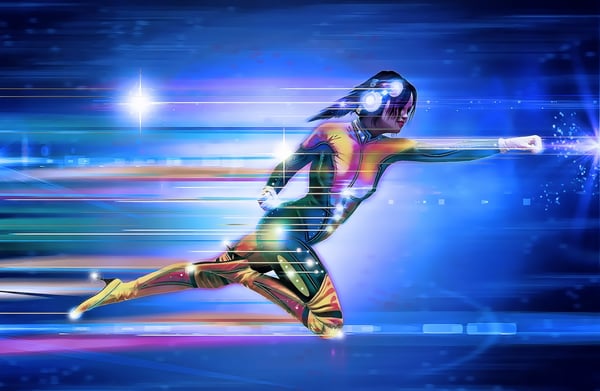 Adding a supernatural element to a character or story is a strong literary tool.

Of course, these examples are just some of the main ways the “super” element can add to a story and its characters. And again, if you were imagining superheroes in these situations, you could just as easily replace them with some sorcerer who uses magic in a similar fashion and facing different problems. This is precisely why the inclusion of the supernatural has and always will be one of my favorite aspects of fiction.

Maybe you’re like me and have made attempts to create a superpowered character, possibly several. And most likely, you weren’t always pleased or as happy with it as you might have pictured. Don’t worry, the same goes for me and pretty much anyone who tackles such a thing.

That's why I'd like to share one of my characters that I think is a bit more refined. Feel free to borrow and tweak the power or the person as you see fit. Hopefully this might actually spark some inspiration in others in terms of how to look at an ability and try a different approach.

Without further ado, here’s the profile of a minor antagonist idea I had in mind for comic (I apologize for no images, didn’t draw anything for him).

Origin: Native to a parallel Earth where everyone has supernatural abilities that are genetically passed on, Riot was born to parents of different power bloodlines. His father had the ability to manipulate and control electronic devices while his mother could manipulate any sound she produced. This strange blend of abilities is what created his utterly unique power of Sound Source Control.

Equipped with a highly versatile and potentially dangerous ability, Riot was recruited by a secretive intelligence agency that sought to be a world order. Now an agent, he goes by the codename Radiohead.

Powers: Sound Source Control is the ability to have full control over any one thing capable of creating sound. Radiohead can use his sense of hearing—or any device that may amplify his hearing—to identify a sound source and choose it. By choosing a sound source, this allows Radiohead to do a few things:

Maybe you’re thinking “That’s awesome!” or “That seems too extreme!" Either way, I wanted to share, and I hope it was at the very least entertaining as an idea.

Posted on Jan 22, 2019 3:24:57 PM by Jordan Leong in english project, in science fiction, in college english, in general education