I loved many of the classes that I took here. The teachers are extremely sociable and the lessons are always made to be interesting! I gained something new from each class that I took, making my experiences in these classes to be amazing. So imagine how hard it was for me to have to choose one to be considered my favorite class! The first thing that came to mind was Introduction to Game Tools, since I was allowed to learn about the tools relevant to my industry and even create something unique in them. That is definitely up there on my list of favorite classes, but then I thought about how much I loved Composition, due to my love for writing and research. I had a lot of choices and it was a hard to choose one.In the end, the class that I choose to be my favorite ended up being Nathan Eskue’s TCH115 - Thinking Strategies! 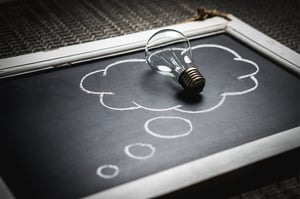 When I first entered TCH115 , I wasn’t expecting a lot. I knew that I had to take it to fulfill one of my degree’s requirements.I also knew that it was blended, and that I was going to be in for a pretty long seven weeks. My friends confirmed this, saying that this class was hard, but, since I had taken numerous hard classes before TCH115, I didn't really think it would be too bad.Honestly, I thought it was going to be boring. But when the class started, I ended up seeing its true colors.

The class acted like a sort of leeway into understanding some of the degrees that we have here at UAT. Eskue incorporated elements from game design, robotics, programming, cyber security, and even digital video. This means that he incorporated a lot of technology into his lessons, so, while we learned some content from each degree, we also had the chance to have a lot of hands on experience the tools that the students within that degree used. I didn’t have any experience with Raspberry Pi’s or video editing before I entered this class. But, when I left, I learned a bit about CPU's, editing with some of the adobe applications, and a lot more too!

An assignment that always comes to mind is the assignment that had us create an actual game. The assignment required us to design a video game, create a game controller for it, and create a trailer that would promote what we had created. It incorporated aspects of degrees that I was already in - such as game design and advancing computer science - but also incorporated aspects from the digital video degree, so it was a pretty interesting project from the start. This was a group project, so I had to work within a group of three. Each one of us had differing skill sets, so we needed to learn how to combine what we know in order to achieve what we wanted. This went well, as we came out of the class with a console text adventure, a controller that can work with the console, and a short silent film to promote our product!

But, from working on that project and from just being in this class, I found myself rapidly developing skills that would prove to be beneficial in my future inside and outside of UAT. On top of what I already mentioned, I learned a lot about working as a team, while also learning about how to look at problems from different angles. Many of the things that I learned from this class transferred pretty well into my future classes. For example, this class taught me about rapid learning, which proved to be extremely helpful during my game design classes, where I would have to quickly learn about engines that I never used so that I could contribute to my teams. The things that I learned about Raspberry Pi’s transferred pretty well into my Production Studio, as I would have to be regularly working with that kind of technology to help my team develop an AI robot. I can go on, but this class really helped me become a stronger person.

But remember what I said about how this class was blended? I think we all know how demanding these kinds of classes can get. The class was pretty fun, but there were moments where we were just relentlessly pelted with information and work. Deadlines were short, and the consequences for missing a deadline were harsh. This, on top of my other classes, left me with little time to myself. I do not regret taking it, though. Matter of fact, the only thing that I regret is not taking it sooner. With all the skills that this class gives you, I know that I could have used them pretty well in the classes that I took prior to that semester. But in the end, I believe that TCH115 launched me in the right direction, and gave me the skills that I needed to work well within my own industry. I would definitely recommend this class to any student here who hasn’t taken it yet, as this would help them get that advantage in their future semesters.